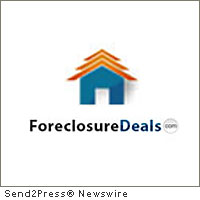 MIAMI, Fla., Dec. 22 (SEND2PRESS NEWSWIRE) — Record numbers of foreclosures hit the market in 2010, as well as record numbers of people looking to buy them, reports Foreclosure Deals, a leading online provider of foreclosure news and information, in a year-end Foreclosure Filings 2010 review. The record-breaking trend of 2009 continued throughout the year, as foreclosures have remained high and many experts are expecting them to climb even higher in 2011. As a result, says James Foxx, a Foreclosure Deals business analyst, many buyers are flocking to the foreclosure market in search of low prices to match record-low mortgage interest rates.

“2010 was a big year for foreclosure investing, and 2011 is shaping up to be very similar,” Foxx remarked.

After a record 2.8 million homes entered foreclosure proceedings in 2009, experts predicted foreclosure filings 2010 would surge even higher. As a response, Congress and the Federal Reserve pledged to do something about it. Interest rates were set low, partly as an encouragement to buyers to start buying up surplus foreclosure homes. Talk of legislation designed to reduce foreclosure filings began spreading in Washington.

The year began with a customary January slump, as foreclosure activity fell 10%. By February, foreclosures were up by only 6% from the previous year, the lowest increase in foreclosures since the epidemic began. In March, the White House revealed its plan to curb foreclosures. The plan provided increased funding for foreclosure education while giving lenders incentives for providing loan modification and refinancing for troubled homeowners. Experts, however, warned that this would only stall foreclosures, as loan modification couldn’t help everybody with trouble paying their mortgage.

By the end of April, these fears seemed well founded. New statistics revealed that foreclosures in the first quarter were 35% higher than in 2009. A closer look at the numbers revealed that much of this increase was in bank repossessions and REO homes, the last stage of foreclosure. There was a much slower growth rate in new foreclosure listings coming onto the market. With moratoriums expiring and banks looking to clear out backlogs of defaulted homes, millions more properties were set to be foreclosed.

As the hot months dragged on, the trend of increased bank foreclosures, but slower-than-normal growth in new foreclosures, continued. Summer also saw large increases in metropolitan foreclosures, and the infamous foreclosure-hotbed states of California, Nevada, Florida, and Arizona suddenly accounted for 19 of the top 20 foreclosure cities in the nation.

By September, industry figures warned that since economic conditions were not improving, the scene was set for more foreclosures. Then came a public outcry over the scandal at Bank of America and JP Morgan, where officials were discovered to have issued foreclosures on homes without even bothering to review them. The story illuminated the frustration with the foreclosure filings 2010 problem, as even the banks seemed to be overwhelmed by the sheer volume of properties.

Despite that October and November saw further decreases in new foreclosures, buyers should be aware that a swell in new foreclosures could happen at any time as loan modification periods expire and more homeowners fall further behind on mortgage payments in 2011.

ForeclosureDeals.com Business Analyst James Foxx is quick to point out the positives for these interested in buying foreclosure houses.

“We saw a lot more repossessions, but we also saw record numbers of homebuyers at foreclosure sales,” remarked Foxx. “Foreclosures are selling at rock-bottom prices, and they remain the best way for first-time homebuyers or investors to find the best deals. I think it’s clear that statistics for foreclosures in 2011 are going to look very similar to those for foreclosure filings 2010.”

News Source: Foreclosure Deals :: This press release was issued on behalf of the news source by Send2Press® Newswire, a service of Neotrope®.