You are here: Home › ‘There’s Gold In Them Hills,’ According to Marketers: Joe Kerr and Others Trek to Sundance
By Send2Press Newswire on January 20, 2011 in California, Entertainment, LOS ANGELES, Calif., Movies and Film Making, Music, Press Releases, Videos 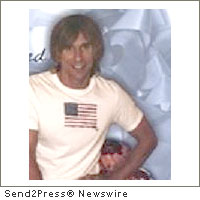 LOS ANGELES, Calif., Jan. 20 (SEND2PRESS NEWSWIRE) — Joe Kerr, composer for film and television, is making his way to the plush Utah resort this week for the annual festival. As many people with things to market are on their way to Sundance to hock there goods. Sundance is one of the more popular events in the film festival season. Started by Robert Redford 28 years ago the festival has become a Mecca for luxury goods and famous celebrities. Besides being a premier place to showcase one’s film and hopefully find a distributor Sundance is now a “marketing must” for those who sell anything Hollywood.

“It’s Joe Kerr” has created a popular YouTube channel with a music video that is beginning to be widely distributed by military families. The video portrays a young woman who is called to duty in the National Guard. She is forced to leave her young daughter and husband behind. In an unfortunate accident the woman is killed tragically leaving her family unexpectedly. The short film, as videos have become, is sad, but the music uplift and compliments the lyrics.

Many people have compared Joe’s music to that of Captain Beefheart, who recently passed away, or Coldplay. Joey is a big fan of both artists and is willing to make music to fit any television show or film. “I am trying to make contacts by going to Sundance,” says Joe, “I love working with creative people and it is my goal to simply make some friends in the industry that I can work with in the future.”

Joey is not alone in these tough economic times many people are finding unique ways to market their products and services. The fact is Justin Bieber wasn’t discovered by a major label; he was discovered by YouTube.com and there are many artists who dream of that same level of success from the Internet. So, as companies give away their products to celebrities Joe will be among them promoting himself by giving away DVDs, CDs and playing some of the local venues in-and-around Park City to entertain visitors.

“I really believe in order to make it in Hollywood,” Joe pontificated, “you’ve got to be willing to go that extra mile, but don’t think I am not going skiing at least one day.” He does plan to get a lot of work in, but says it will be a working vacation. “The best deals in Hollywood are always made in a casual environment,” according to the artist and he just wants to be where the action is happening; and for the industry, this week, the action is in Sundance and Park City, Utah.

“Sundance is so exclusive,” declared Joey, “but everywhere I go there is a party and you are all invited.” Part of Joe’s unique strategy to market himself to producers and directors is by going to many film festivals (and meeting them in a casual setting), but he says, “Sundance is the mother load.”


News Source: Joe Kerr :: This press release was issued on behalf of the news source by Send2Press® Newswire, a service of Neotrope®. View all current news at: http://Send2PressNewswire.com .

The Gruesome True Story of the 2006 Richmond Murder Spree
CommunityJourney.com Launched on January 14, 2011, and is Now Available to the Public