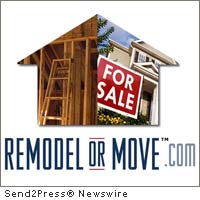 SUNNYVALE, Calif., Jan. 25 (SEND2PRESS NEWSWIRE) — ABCD Publishing announced this week the release of RemodelOrMove.com’s U.S. Homeowner Sentiment Report for Spring 2011. It reveals that homeowners who are interested in remodeling or expanding their homes have limited options.

If a homeowner moves, the report showed that the new home that meets their needs will cost, on average, $428,000. This is $145,000 more than what they could sell their current home for. On the other hand, the remodel cost estimate is approximately $100,000 to make similar improvements to their existing home.

“To remodel or move has always been a difficult decision for homeowners,” says Dan Fritschen, founder RemodelOrMove.com. “This most recent survey reaffirms that both options could cost the homeowner more than $100,000. The calculator on our site can help homeowners to quickly gather information on renovating and moving and then make a recommendation which is best for an individual’s situation.”

Fritschen adds that anyone who is considering a move or remodel should work with a real estate agent who can give them three key data points: an accurate estimate of their home’s value, the amount their home could appreciate as the result of a remodel and the price of a different home that would meet their needs.

So, what changes do homeowners want to make if they remodel or move? The Spring 2011 report includes the following data:
– 57 percent report that they would like to have at least one additional bathroom;
– 49 percent would like a kitchen renovation;
– 46 percent are looking for more bedrooms; and
– 44 percent would like a bathroom remodel.

While home expansion and renovation is on many people’s minds, the majority in the survey reported that they are very satisfied with local schools, their home’s location and neighborhood.

A detailed report is available at: .

Additional information can be found at: .

News Source: ABCD Publishing LLC :: This press release was issued on behalf of the news source by Send2Press® Newswire, a service of Neotrope®. View all current news at: http://Send2PressNewswire.com .