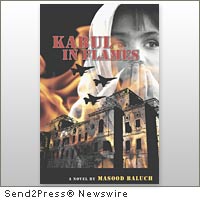 NEW YORK, N.Y., Jan. 25 (SEND2PRESS NEWSWIRE) — “Kabul in Flames” (ISBN: 978-8-799-29522-7) was such a success in Denmark that Danish International Edition announced this week its release in the U.S. The author, Masood Baluch, writes from the heart. He is an Afghanistan refugee who has been living in Denmark since the age of 15.

At the center of “Kabul in Flames” is Bashir, an Afghan man who lives a seemingly peaceful life with his family in the small middle-class community of Kabul. Then one day, in 1978, a communist coup takes down the elected government. The coup and subsequent Soviet invasion have dramatic consequences on Bashir’s family. Bashir’s father is imprisoned on false charges and subjected to brutal treatment and Bashir undertakes a morally unacceptable and highly dangerous secret mission to borrow money to bribe the authorities into releasing his father.

The story is complicated. While steeped in fear, there are also struggles with love, class warfare and ultimately survival. At every turn, characters face religious, moral and personal dilemmas.

“The book realized such great results in Denmark, that Danish International Edition decided to publish it in the U.S. because it was predicted that an American audience might have an even greater interested in the story line,” explains Baluch.

Some current Danish feedback includes comments such as: “Profound and captivating;” and, “Thoughtful history.” The press have said, “The book offers drama, love and war – an exciting combination with a nice outcome.”

Baluch adds that, “The story is based on real-life experiences and it’s my intent to provide the reader with realistic insight into how ordinary people lived and felt while enduring difficult circumstances and challenging conditions that were outside of their control.”

Sixty percent of the book’s proceeds are being donated to KOCHAH, a non-profit organization dedicated to providing humanitarian assistance and educational opportunities for deprived children as well as creating an awareness of children protection and their rights.

“Kabul in Flames” is available on Amazon.com, BarnesandNoble.com and at other major book retailers.

News Source: Masood Baluch :: This press release was issued on behalf of the news source by Send2Press® Newswire, a service of Neotrope®. View all current news at: http://Send2PressNewswire.com .