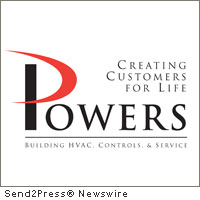 NORTH LITTLE ROCK, Ark., March 1 (SEND2PRESS NEWSWIRE) — Powers of Arkansas, a Building, HVAC and Controls company based in North Little Rock, AR won the Business of the Year award for 2010 presented by Arkansas Business in Category III (76-300 employees). Other nominees in this category were Apex Communications, Garver, LLC, Rockfish Interactive and TME, Inc.

“I value this award as a testimony to our employees and their hard work and dedication to going above and beyond every day for our customers,” said Alan Hope, President and CEO of Powers of Arkansas. “I also believe that an honor such as this is a testament to our customers and their support and commitment to our company.”

News Source: Powers of Arkansas :: This press release was issued on behalf of the news source by Send2Press® Newswire, a service of Neotrope®. View all current news at: http://Send2PressNewswire.com .