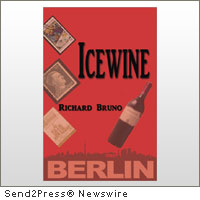 “Prepare for a thrill as ‘ICEWINE,’ by R.R. Bruno, takes you on an adventure that includes elements of history and world travel, mystery, exotic cuisine and wine; and Europe, which is Bruno’s native country,” says publishing guru Todd Rutherford. “Overall, this is an absolute must read, with a climactic confrontation comparable to that of Dan Brown’s ‘The Da Vinci Code’ and Michael Crichton’s ‘Timeline.'”

The “ICEWINE” adventure begins when Alex James and his friends place the winning bid on a rare 1939 icewine which was once owned by Herman Goring, second in command to Adolph Hitler. By luck, the group uncovers a microfilm on the underside of the label that was hidden by Goring. The microfilm contains a clue to a fortune he hid during the waning months of the war; a fortune that would be used to begin a new Reich.

The group is able to crack the code, setting off a cross-country search for hidden treasure in Europe. What Alex and friends do not know is that there is a group of Nazi-killers who are after the icewine – and they will not rest until they have it.

A FREE three chapter preview of this action packed adventure book is available at http://www.BookstandPublishing.com/book_details/ICEWINE along with a special, limited time introductory offer, of only $10.95 for the paperback edition.

ICEWINE is also available for $15.95 on: http://www.amazon.com and http://www.barnesandnoble.com .

News Source: Bookstand Publishing :: This press release was issued on behalf of the news source by Send2Press® Newswire, a service of Neotrope®. View all current news at: http://Send2PressNewswire.com .