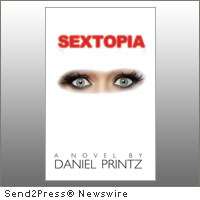 ROANOKE, Va., March 28 (SEND2PRESS NEWSWIRE) — Out in Left Publishing announced this week the launch of a new science fiction novel, “Sextopia” (ISBN: 978-098-328-9203). Authored by Daniel Printz, “Sextopia” focuses on a future world, devastated by bloodshed that is transformed by two prominent and influential men who take the small, remaining population and devise a system where everyone is governed by the original sin.

The main character, Rupert Exstacia, is a young man, recently released from development, the institution where children are sheltered from society, but conditioned subliminally to embrace Sextopia’s mantra of self-indulgence.

Rupert faces pressure from those around him to copulate with a female Sextopian so he can have his virgin seal removed. Although women are physically altered for perfection, Rupert finds himself at odds with the strange world around him.

He eventually flees for the capital city of Erosmos with his friend Dave who is in grave danger of his own as he faces the possibility of being converted by the government into a worker – a sexless, spirit-broken person who must perform the labor while the sexual elite spend their days in physical bliss.

While “Sextopia” is categorized as science fiction, there is an offbeat, edgy humor that complements the story. There are also disturbing and frightening scenes. For example, at one point in the novel, the Purists, a group of agitated females who smuggle forbidden pre-Sextopian items from the underground, are encouraged to participate in a disturbing new offensive against Sextopia by their leader, Helena.

Eventually, Rupert meets a young girl who, like him, is wary of this bold new society. To find happiness, they have to escape from the coveting eyes of a world gone mad.

“Sextopia” is currently available through the website: www.outinleft.com or at Amazon.com in printed format ($14.95); and as an e-book ($5.99) at Amazon and the Barnes & Noble website. It is 342 pages.

About the Author:
Daniel Printz is a festival award-winning filmmaker. His 2006 feature “Pinko’s Place” played in film festivals across the country. “Sextopia” is his debut novel. A second one is soon to follow – a mystery/suspense novel titled “Sand Pail City.”

News Source: Out in Left Publishing :: This press release was issued on behalf of the news source by Send2Press® Newswire, a service of Neotrope®. View all current news at: http://Send2PressNewswire.com .