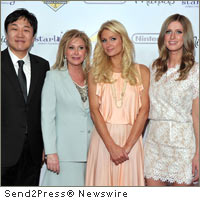 Co-chaired by Starlight board member and Variety publisher Brian Gott, “A Stellar Night” showcased inspirational stories from Starlight families and paid tribute to humanitarians, who are helping seriously ill children and their families cope with their pain, fear and isolation.

“I am so honored that Starlight is presenting my sister, my mother and me with its ‘Heart of Gold Award’ tonight,” said Nicky Hilton. “The award recognizes those who have big hearts and have supported Starlight in improving the quality of life for young people. Recently, my family invited several Starlight families to our home to help them forget their worries for a little while. We had such a fun time together – playing games, having lunch – and it was nice to see the children that afternoon smile and play and laugh. The event we hosted at our home was an experience I’ll never forget.”

“I am honored to receive Starlight’s ‘Jacki Carlish Humanitarian Award,'” said Do Won Chang. “[Forever 21] worked with Starlight last holiday season to sell bracelets with the message ‘give to love, love to give.’ Like it says in the bible in 1 John 3:18: ‘Dear children, let us not love with words or tongue, but with actions and in truth.’ In a world with so much tragedy, especially now in Japan, I pray that each of us will do our part to help those that are in need. Thank you Starlight for this great honor and thank you to God for his many blessings.”

For more highlights and photos from the evening, send an email to presshelp@starlight.org .

About Starlight Children’s Foundation:
When a child or teenager has a serious medical condition, everyone in the family is affected. For more than 25 years, Starlight Children’s Foundation has been dedicated to helping seriously ill children and their families cope with their pain, fear and isolation through entertainment, education and family activities. Starlight’s programs have been proven to distract children from their pain, help them better understand and manage their illnesses, and connect families facing similar challenges so that no one feels alone. Through a network of chapters and offices, Starlight provides ongoing support to children, parents and siblings in all U.S. states and Canadian provinces with an array of outpatient, hospital-based and Web offerings. Programs are also delivered internationally through affiliates in Australia, Japan and the United Kingdom. To learn more visit www.starlight.org .