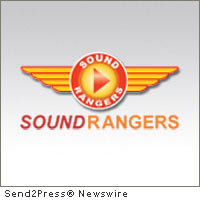 SEATTLE, Wash., March 30 (SEND2PRESS NEWSWIRE) — Soundrangers (www.Soundrangers.com), an award winning game audio studio, announces the release of its popular online sound effects library on hard drive. The Soundrangers Sound Effects Library has been inspired by years of custom sound design for video games and has been used for years by such industry leading companies as Google, Nickelodeon, Microsoft, Cartoon Network, Adobe, and HBO.

The library contains over 21,000 high definition sound effects created by the Soundrangers team of audio professionals. The sounds are edited and optimized for easy use in interactive media, traditional media and beyond. With short looping sounds, one-shots with multiple variations and source material useful for creating a wide variety of sound effects common to the video game genre make this a one of a kind, world-class sound library.

The sound files are enriched with metadata compatible with Soundminer, NetMix, Basehead and other audio search tools, and are available in multiple formats, sample and bit rates. Delivered on a professional quality Glyph hard drive compatible with Mac and Windows, one year of free sound effects updates and complete with search software allowing easy auditioning and placement of sounds into most major audio applications.

Founded in 1998, Soundrangers.com was the first online sound library to specialize in creating sound effects and music specifically designed for video games and interactive media. From the beginning, their focus was to provide unique, high quality sound effects and music designed for interactive media while utilizing a website delivery system focused on quick and easy sound auditioning, selection and download. Soundrangers continues to grow its library, now adding a terrestrial hard drive for users with large sound effects requirements.

Soundrangers, in addition to creating their own proprietary sound library, has spent more than 14 years developing custom sound and music for video games. This experience gives them a unique insight into the audio needs of video games and allows them to create relevant game content for their sound library. By releasing their library on hard drive, users with larger production needs can now easily integrate Soundrangers Brand Sounds into their production pipeline. Soundrangers is making it easy for sound designers and game developers to find high quality material that will work in their projects.

Game developers know that high quality sound content can help distinguish their products in the competitive world of video game development. However, locating sound effects that work within the unique demands of video game and interactive media production can be a challenge. Soundrangers continues to lead the way in making the process of finding, creating and implementing sound effects for video games easier than ever.

News Source: Soundrangers :: This press release was issued on behalf of the news source by Send2Press® Newswire, a service of Neotrope®. View all current news at: http://Send2PressNewswire.com .