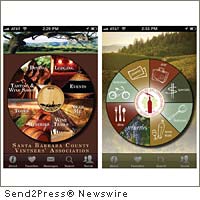 SACRAMENTO, Calif., April 5 (SEND2PRESS NEWSWIRE) — Northern California wine tourists will soon have two more free iPhone wine guide apps, just in time for upcoming seasonal events. In April, GoLocalApps, a unit of 1776 Productions, will be releasing apps for the Santa Barbara County Vintners’ Association (SBCVA) and the Winegrowers of Dry Creek Valley (WDCV). The apps will allow users to sort wineries by distance, varietal, amenities and, as with the SBVCA app, by region and AVA.

Designed by GoLocalApps, the user interfaces feature simple, intuitive designs that make it easy for wine lovers to browse events, share their experiences on Twitter and Facebook and find the information they need while they are out and about. GoLocalApps realizes that people’s approach to wine tasting is to visit specific areas. Rather than creating “mega-apps,” that encompass huge regions, such as all of Sonoma Valley or the entire Central Coast, GoLocalApps creates niche, regional apps, such as the Livermore Valley, Dry Creek, Lodi, Santa Cruz, Santa Clara, and Santa Barbara, to name a few. Additionally, their apps are easily found in the iTunes App Store by simply searching by city, region, or AVA name.

The SBCVA and WDCV apps were developed in partnership with the winery associations and are compatible with the Apple iPod touch, iPhone, and iPad. An Android version will be released in upcoming months.

“The success of our previous apps for the Livermore Valley, Santa Cruz, and Santa Clara Valley wine regions made these apps a natural progression in our development,” says Heidi Komlofske, president of 1776 Productions, the parent company of GoLocalApps. “With the growth of smart phone usage, more local regions and organizations are going to want their own app, focusing on just their needs, and not a part of a larger regional app,” she continues.

Jim Fiolek, Executive Director of SBCVA says “I’m not sure this is something I should admit – but GoLocalApps was ahead of us the entire way. Before I thought it, they had it done already…and, even better than I thought it would be! Did you ever see MASH? Kinda like how Radar was with Colonel Blake.” He goes on to say “We’re very excited to have this app as a part of our marketing and promotional efforts and having it available in the Apple App store, free of charge, in time for the 2011 Vintners’ Festival weekend, April 15th – 18th.”

The Dry Creek Valley wineries app will be available in time to help wine tourists get around the valley during the annual Passport to Dry Creek Valley, April 30 and May 1. Kelly Ferris, marketing coordinator for the WDCV says, “Now, planning a visit to Dry Creek Valley is as easy as pushing a button. Search our wineries by location or varietal, check out our Wine Trails, then find a restaurant or place to stay in Healdsburg. Everything you could want to know about visiting Dry Creek Valley is now at your fingertips!”

Currently in development is an app for the Lodi Winegrape Commission, providing a guide to the Lodi wineries and local restaurants, hotels, and shopping with an estimated release date of late April — in time for their ZinFest Wine Festival, May 13th – 15th. Following on the heels of Lodi will be an app in partnership with the Sacramento’s Midtown Business Association.

About GoLocalApps:
GoLocalApps (www.golocalapps.com) is a subsidiary of 1776 Productions and focuses on local and regional apps that help communities and organizations directly reach their customers and visitors while they are on the go. The GoLocalApps platform is being used by Main Street communities, wine associations, monthly art walks, business organizations and travel guide companies throughout the U.S. Their philosophy is to develop mobile apps that are fun for the customer and their users and that technology should be in the background, providing a smooth user experience.

News Source: 1776 Productions, LLC :: This press release was issued on behalf of the news source by Send2Press® Newswire, a service of Neotrope®. View all current news at: http://Send2PressNewswire.com .