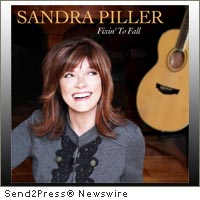 LOS ANGELES, Calif., April 11 (SEND2PRESS NEWSWIRE) — Strong radio airplay, a steady climb up the charts and numerous awards have greeted songs from Sandra Piller’s (www.sandrapiller.com) current album, “Days Like These,” and now she is releasing her next single to country radio, “Fixin’ To Fall.” The tune is “an upbeat love song that makes you want to dance,” notes Piller.

Written by Jolene Kay Schmitz, the song lets Sandra really get into the fun and romance of the lyrics: “I’m fixin’ to fall in love with you, my heart is slippin’ into your eyes of blue.” With strong bluegrass harmonies, the song also features solos on fiddle, Telecaster and piano.

The “Days Like These” album, released this year on Shady Hill Records, was recorded at “Cowboy” Jack Clement’s studio in Nashville. The album’s dozen tracks were produced by Jane Bach (writer of hits for Reba McEntire, Jo Dee Messina and others) and Executive Producer Clement (producer of hits for Roy Orbison, Johnny Cash, Jerry Lee Lewis and a host of other country legends).

The story of how Sandra Piller came to record county music is one of inspiration, hard work and patience. Putting a singing career on hold in order to raise her family, she returned to her first love of music “a little later in life than the typical teen singer,” as she puts it. With this, her newest album, she is moving ahead with a career that has already seen her named Country Artist of the Year from New Music Weekly magazine.

Most recently, her live show has added keyboardist and music director Loren Gold, noted for his work on large tours by Mandy Moore, Kelly Clarkson, Kelly Pickler, the Dancing with the Stars touring show, and the American Idol live shows.

The “Days Like These” album is available on iTunes, Amazon, and all the usual places for physical and digital distribution, with promotion and marketing headed by Harvey Cooper, former head of 20th Century Fox Records.

For more information, promo copies of “Days Like These,” or interviews with Sandra, please contact John Scott G of G-Man Marketing.

News Source: Sandra Piller :: This press release was issued on behalf of the news source by Send2Press® Newswire, a service of Neotrope®. View all current news at: http://Send2PressNewswire.com .