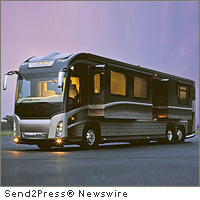 FORT LAUDERDALE, Fla., April 14 (SEND2PRESS NEWSWIRE) — Despite the recent climb in oil prices, RV travel is expected to reach record levels this year, according to Florida RV rental dealer Allstar Coaches. “It’s common for us to see a spike in sales during the summer, however this year we’re seeing dramatic increases in bookings all the way through December and into 2012,” said CEO Rob Tischler.

Allstar operates a fleet of luxury motorhomes which are available for rental nationwide at strategically located depots in seven states. Earlier this year, the company opened two additional Florida locations and by the end of next year expects to open as many as twelve franchised locations across the country. “Since Florida RV rentals account for almost 40% of our overall sales, it was only natural to expand our operations there first,” added Tischler.

Industry insiders believe that the increased demand in RV travel is being driven by a rebounding economy combined with an educated consumer base that’s growing tired of the runaway costs, uncomfortable security screening and long delays associated with flying.

Adam Froman, a self-employed RVer who runs his graphics business from home, says that “Traveling in an RV equipped with satellite technology allows me the freedom to run my business while out on the road.” When asked whether fuel prices would affect his travel plans, Froman said “I’ll spend less traveling in the RV and preparing my own meals than I would by paying airfare, hotel and meals on a traditional trip and since I don’t have to deal with crowded airports; my vacation starts the minute I pull out of the driveway.”

Television networks and film crews have also taken notice of the RV industry, cashing in on its growing popularity. HGTV’s annual RV show is among the most watched specials on the network. Allstar Coaches was featured on ABC’s “The Bachelor” when Jake Pavelka and nine hopeful bachelorettes embarked on a RV trip up the California coast.

“People are beginning to understand that the benefits of RV travel far outweigh the costs and that’s helping to drive record sales,” says Tischler, “the price of oil isn’t slowing us down at all.”

Allstar Coaches has an RV rental for virtually any taste or budget and offers Florida RV rentals from locations in the Sunshine State, with additional locations in California, New York, New Jersey and Pennsylvania, Arizona and Nevada. For detailed pricing and information, call 866-838-4465 or visit Allstar Coaches online at www.allstarcoaches.com .

News Source: Allstar Coaches :: This press release was issued on behalf of the news source by Send2Press® Newswire, a service of Neotrope®. View all current news at: http://Send2PressNewswire.com .