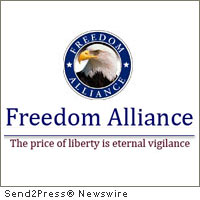 WASHINGTON, D.C., May 4, 2011 (SEND2PRESS NEWSWIRE) — In observance of Military Appreciation Month, the Gingrich Foundation has recognized Freedom Alliance as Charity of the Month this May for the organization’s commitment to honoring the service and sacrifice of America’s men and women in uniform and their families.

Founded in 1990 by Marine Corps Lieutenant Colonel Oliver North, Freedom Alliance has worked arduously over the last twenty years to achieve their mission to “advance the American heritage of freedom by honoring and encouraging military service, defending the sovereignty of the United States and promoting a strong national defense.”

“We at Freedom Alliance are grateful and honored to be recognized in this way by the Gingrich Foundation,” said Freedom Alliance President Tom Kilgannon. “Newt and Callista understand well the importance that philanthropy and private charity play in America’s role as an exceptional nation. They provide great leadership through their personal support, and public recognition, of worthy charities.

“We thank them for highlighting Freedom Alliance’s efforts to support the individuals, ideas and institutions which make America great – specifically, the men and women of America’s military. During Military Appreciation Month, we’re honored to partner with Speaker and Mrs. Gingrich to shine a light of recognition on America’s most deserving citizens – our Soldiers, Sailors, Airmen, Marines, and their families.”

Freedom Alliance’s Support Our Troops Program provides continual outreach to America’s servicemen and women and their families, hosting various events and providing financial support to members of the Armed Forces who have been wounded in combat or who are currently serving on the front lines. Celebrating its 10th year, the Freedom Alliance’s Military Leadership Academy develops leadership skills and strengthens character, providing 14-18 year old students with a summer camp experience, grounded in military discipline, that teaches the importance of physical fitness, service, and teamwork. Freedom Alliance’s Scholarship Fund supports the children of our military heroes who have been killed in combat or who have been permanently disabled in an operational mission or training accident. Over the years Freedom Alliance has awarded over $4 million dollars in scholarships.

“Freedom Alliance has been a true and devoted leader in supporting the men and women of our nation’s military and their families, who sacrifice so much for our freedom,” said Callista Gingrich, President of the Gingrich Foundation. “Newt and I are delighted to recognize Freedom Alliance as our Charity of the Month and hope each and every citizen will consider supporting this worthy organization as a sign of deep appreciation for our nation’s military.”