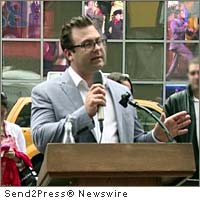 NEW YORK, N.Y., May 26, 2011 (SEND2PRESS NEWSWIRE) — Braving a threat of thunderstorms, busy New Yorkers and vacationing tourists gathered in Times Square Tuesday morning to hear classical music by Juilliard students followed by a “flash mob” of seemingly disabled older people who suddenly abandoned their crutches to begin dancing joyfully. That captured the crowd’s attention. What was up? The question was soon answered by Jonas Roeser, Senior Vice President of Marketing and Operations for LTC Financial Partners LLC (LTCFP), who also serves as President of the 3in4 Association, which runs the 3 in 4 Need More campaign.

Speaking from a podium into a microphone, Roeser explained the point of the flash mob: “Millions of Americans, as they get older and live longer, will need help with the tasks of daily living – ongoing care beyond the scope of regular health insurance or Medicare. Most people don’t know that, so we’re kicking off a summer-long awareness campaign where we’ll be traveling the country to educate Americans about planning for their long-term care needs.”

According to a Sun Life Financial Survey, over 90 percent of Americans either underestimate or have no idea how much they will spend on healthcare in retirement. 74 percent of consumers age 55 to 65 polled for a recent survey said they are concerned about needing some kind of long-term care. “That’s about three in every four of us!” Roeser said on Tuesday.

The 3 in 4 Need More campaign will feature a national tour by Dr. Marion Somers, a leading elder care expert and author, and long-time advocate for long-term care. Dr. Marion followed Roeser on the podium to announce the bus tour, as well as launch a contest to find caregivers across America and award one of them a $50,000 makeover. For a video of the Times Square “Dancing Grandmas” event, click here: http://www.youtube.com/watch?v=WGwCkLb3LDs .

LTCFP (www.ltcfp.com) is one of the nation’s largest and most experienced long-term care insurance agencies. Together with insurance carriers and other organizations, LTCFP is a sponsor of the 3 in 4 Need More campaign, which was conceived by Roeser. For more on 3 in 4 Need More, the bus tour, and the caregiver contest, visit www.3in4NeedMore.com or www.3in4contest.com .