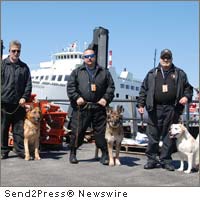 The Bridgeport & Port Jefferson Steamboat Company is the first ferry in the United States to receive a federal grant to implement explosive detection canine teams.

The ferry company has proved to be a vital link between Long Island, NY and southwestern Connecticut since 1883 and provides service to approximately 400,000 vehicles and one million passengers per year. The events of September 11, 2001 have served to reinforce the company’s commitment to the safety and security of its constituency, the traveling public. With keen awareness of the potential for terrorist activity or narcotics exchange, the company has greatly enhanced security measures including increased awareness training for employees, cutting-edge technology, and explosives detection canine teams.

For more than 15 years, Officer Greco’s celebrated company has employed an intensely trained team of canines and their handlers to seek out contraband and explosive devices at the state and municipal levels. In the private sector, Long Island K-9 was the first agency of its kind to introduce these specialized protection services, and continues to increase its roster of high profile clients.

The unique company is dual licensed by the federal Drug Enforcement Administration (DEA) and the New York State Department of Labor to possess high explosives for its training purposes. The company has also sparked the interest of the Central Intelligence Agency (CIA) canine division, major airports and airlines, Fortune 500 companies and private security organizations. Officer Greco has appeared on Good Morning America, Japanese television, Inside Edition, News Channel 4, and has held interviews with The New York Times and 880 CBS News Radio. He is available for seminars and demonstrations.

News Source: Long Island K-9 Service :: This press release was issued on behalf of the news source by Send2Press® Newswire, a service of Neotrope®. View all current news at: http://Send2PressNewswire.com .