You are here: Home › When Faith Triumphs Over Fear and Tragedy – The Last Chapter in the Life of Mrs. Sammy Davis, Jr.
By Send2Press Newswire on June 13, 2011 in Books and Publishing, Florida, General Editorial, Music, Press Releases, SARASOTA, Fla. 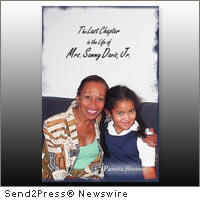 SARASOTA, Fla., June 13, 2011 (SEND2PRESS NEWSWIRE) — A new book, “The Last Chapter in the Life of Mrs. Sammy Davis, Jr.” (ISBN: 978-0-557-73613-3) offers a frightening glimpse of a Hollywood secret that was nearly “buried.” In her chronicle, author Pamela Sherrod reveals the events leading up to the death of Altovise Davis, and interweaves these startling revelations with intriguing views of numerous celebrities, from Bill Cosby and Raven-Symone’ to legendary icons, Elizabeth Taylor and Richard Burton.

In 2005, Sherrod was introduced to Altovise Davis to help write her autobiography. She was the wife of the late Sammy Davis, Jr., the famous Rat Pack performer known as “The World’s Greatest Entertainer.” Sherrod and Altovise, however, started a partnership to write inspirational stories for youth, hoping to motivate them to reach for higher goals.

“At first, it was purely academic,” says Sherrod, “because Sammy started performing when he was only four and missed going to school. He always regretted this and wanted kids to value their education. Seeking a ministry, I also wanted them to know about God’s love … that they could experience his miracles by operating in love.” Ironically, Sherrod’s own faith in this “miracle” principle would soon be tested.

Emotionally, the story was difficult the write, not only because of Sherrod’s own tragedies (while bouncing back from surgery, she lost, both, Altovise and her fiance within 35 days), but because of the enormity of what she’d witnessed: greed, deception, and cruel betrayals. When Sammy died in 1990, he left Altovise with a tax lien of over $5 million dollars, which prompted the auctioning of many of their possessions. Altovise, however, managed to keep a few valuables for herself. But, in one ugly incident after another, even these were “snatched” from her possession, including a billfold Richard Burton had given to Sammy, and the Presidential Ring presented to him by Richard Nixon. For Altovise, the heartbreak of losing these dwindling keepsakes wouldn’t end. Friends tried to protect her, but alcoholism made her vulnerable to abuse. Each season led to further losses, as people swindled her, raided her bank accounts and helped themselves to her safety deposit box. Recalls Sherrod, “It was like watching vultures swarm over and attack someone who was still alive.”

Then, there was the mystery surrounding the screenplay the two women created, entitled, “A Detour to Mexico.” Sherrod’s questions went unanswered when she discovered there were striking similarities between the plot of their musical and the film, “The Cheetah Girls 2: When in Spain,” starring Raven-Symone’. Her calls were never returned, not even by her old childhood friend whom she considered her “mentor.” He was a writer and supervising producer on the show, “That’s So Raven,” and the contact to whom she’d given the original outline and excerpts of their story. The years passed and Sherrod spent many sleepless nights “… torn over all the unanswered questions, and fearing the consequences of even asking them.” She reached a defining moment when she realized that, her fears over “Hollywood’s reaction,” were in direct conflict with her faith, especially her “calling” to reach out and inspire young people. Despite these tragedies, she had to move forward.

Now, having completed the book, Sherrod continues the work that she and Altovise began, knowing that Altovise’s voice will finally be heard … as well as her own.

“The Last Chapter in the Life of Mrs. Sammy Davis, Jr.” can be purchased at www.lulu.com, Amazon.com, BarnesandNoble.com, or purchased (ordered) at most local bookstores. Proceeds from the book will be used to support programs for recovering young addicts, develop motivational programs for students and create inspirational/educational books and films.

News Source: Pamela Sherrod :: This press release was issued on behalf of the news source by Send2Press® Newswire, a service of Neotrope®. View all current news at: http://Send2PressNewswire.com .