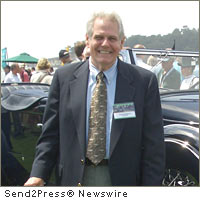 CHICAGO, Ill., June 16, 2011 (SEND2PRESS NEWSWIRE) — Thomas A. Moretti (“Tom”), age 71, a 26 year resident of Inverness, IL passed away due to complications from lung cancer surrounded by his daughters on June 14, 2011. Tom is survived by his loving daughters, Joette (Mark) Doran and Suzette (Jim) Roppel and his cherished grandchildren Jay and Sarah. His brother James Moretti, sisters Rita Kincess and Carol Gilio also survive him. Tom was a successful business man and renowned Packard car restorer and authority.

Tom began restoring old cars in 1960 and bought and restored his first Packard, a 1937 Super Eight Victoria convertible in 1974. Thereafter, he restored a 1936 Packard Twelve LeBaron-bodied town car which was his first of five wins in his class at the prestigious Pebble Beach Concours d’Elegance (“Pebble”) in 1997. Tom went on to restore a 1936 Twelve convertible coupe that took first in class at Pebble in 2000, a 1934 Packard Twelve Victoria that took first in class in 2003, a 1934 Packard 1107 seven passenger touring car previously owned by the City of New York as a parade car which took first in class in 2007 and a 1932 Packard Twin Six 905 Coupe Roadster formerly owned by Clark Gable which won First Place in the American Open Packard class at Pebble Beach in 2009.

Tom was in the process of restoring a 1934 Packard Twelve Touring Sedan at the time of his passing. Tom’s restorations and wins at Pebble Beach were featured in the cover story in Hemmings Classic Car Magazine in February, 2010.

Tom not only personally restored these cars but also toured and competed with them around the country winning every possible award including best of show. Despite all of his achievements in the car world Tom can best be remembered for his engaging personality, constant smile and good will to all. Everyone who knew him loved him. For those who wish to leave a lasting tribute to Tom’s life, memorials to American Cancer Federation would be greatly appreciated.

News Source: Joette S. Doran :: This press release was issued on behalf of the news source by Send2Press® Newswire, a service of Neotrope®. View all current news at: http://Send2PressNewswire.com .