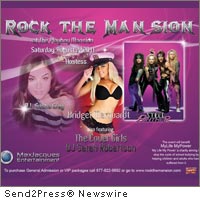 A host of stars will join the fun including D-wrek from MTV’s Wild ‘n Out and True Blood’s real life princess Natasha Alam and World heavy champion Evander Holyfield. The cover girls will also perform at this rock themed event.

Special attraction of the evening will also include a fashion show featuring “Bridget by Roma” a Halloween costume line designed exclusively by Bridget Marquardt and Sam Fard of Roma Costumes.

Guests will rub elbows with beautiful Playmates, celebrities, models and some of the hottest girls in Southern California.

MyLife MyPower (www.mylifemypower.com) will benefit from this event.

To buy tickets go to www.rockthemansion.com .

News Source: Max Jacques Entertainment :: This press release was issued on behalf of the news source by Send2Press® Newswire, a service of Neotrope®. View all current news at: http://Send2PressNewswire.com .