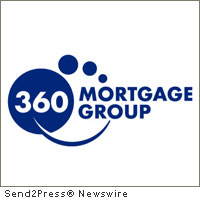 Mortensen was a recipient of First Federal Bank of California’s prestigious “President Circle Award” for three years consecutively and completed several in-house education programs with the bank, as well. She earned an associate degree focusing on the Arts and Science from Santa Barbara City College.

“Before working at 360 Mortgage Group, it was very difficult to get out in the field and see brokers because of all the emails and underwriting questions,” Mortensen said. “When I saw that 360 had incorporated an underwriting chat button into their system, I was sold.”

“So many companies today do not allow brokers to communicate with their underwriters, and this is a big disservice. I love the fact that the brokers here will have all the info they need at their fingertips, giving me freedom to cultivate new business. I hit the jackpot here because 360 has both the technology aspect and employees who are friendly, dedicated, and responsive,” she said

“I’ve known Mary for 20 years,” said Buzz Doxey, owner of Sun Coast Financial. “The thing about Mary is her follow up. How our company conducts itself is very important, and I need fair rates and service. Mary will always take care of her end. If I need her to do something, I know it will get done.”

About 360 Mortgage Group, LLC:
Established in 2007, 360 Mortgage Group LLC (www.360mtg.com) is a privately owned mortgage bank that has successfully utilized its high-technology platform to provide better communication and customer service to business partners. An approved Fannie Mae seller/servicer, 360 Mortgage Group is centralized in Austin, Texas and services more than 25 cities across the United States.