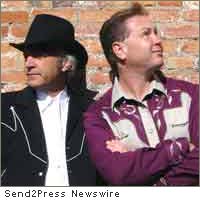 REDDING, Calif., Sept. 11, 2011 (SEND2PRESS NEWSWIRE) — Country music legend Merle Haggard is crisscrossing all of North America throughout the year, playing theaters and arenas, and at any given show, the opening act can be Scott Joss, the fiddle player who is a regular member of Haggard’s band, The Strangers. As a songwriter, Joss is part of Golosio Music Publishing (www.golosio.com), and he composes and plays a wide variety of country music, from classic and roots music to more modern country tracks. His performances on the Haggard tour have been favorably written up in some of the press coverage of the shows.

Joss is proving to be excellent choice as opening act because of his evocative vocals and his ability on guitar, mandolin, and fiddle. Before he was old enough to vote, he won the California State Men’s Fiddle Champion three years in a row. He went from that achievement to playing with some of the most noted names in the industry, including Dwight Yoakam, Pete Anderson, Tiny Moore, Roy Nichols, Dusty Wakeman, and Joss’ fiddle teacher, Jana Jae (of Buck Owens fame).

Scott Joss was just 18 years old when he made his debut as one of The Strangers. “That first show with Merle was quite an amazing experience,” Joss states, “considering it was at Carnegie Hall. Nothing like starting off with a little pressure.”

At the start of the decade, Joss collaborated with Doug Colosio, John Scott G and Haggard on the song “Bad Actor,” which appears on Hag’s Vanguard album “I Am What I Am” released in April, 2010, to rave reviews and which achieved the distinction of appearing on both the Country and Pop charts of Billboard magazine.

The team of Scott Joss and Doug Colosio released their own album last year, “A Couple of Strangers,” on Golosio Records. Defying superstition, the collection offers 13 tracks, all of which are available on Amazon and iTunes.