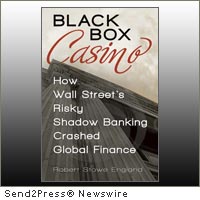 The invitation-only signing will take place on Monday, Oct. 10 from 6 p.m. to 8 p.m. in the West Tower at the Hyatt Regency Chicago.

The following is an excerpt from Chapter 4 of Black Box Casino, titled “The Race to The Bottom:” In agreeing back in 1992 to thin capital requirements, a weak prudential regulatory scheme, a green light to run its own investment portfolios, and affordable housing goals that could steadily rise, Fannie Mae and Freddie Mac inadvertently entered into a suicide pact. Along the way, however, a lot of people would get rich greasing the skids for their demise.

According to Titan Lenders Corp. founder and president Mary Kladde, many of the book’s assertions about the missteps and ethical miscalculations that lead to the mortgage meltdown mirror its own position that the mortgage industry is in need of reformation with regard to data integrity and transparency.

“Titan Lenders Corp. firmly believes that a new mortgage paradigm is imminent, one in which transparency, data integrity and risk management are the cornerstones of responsible lending, ensuring a more stable securitization marketplace, and improving confidence in our industry’s standards,” Kladde explained.

“Robert Stowe England’s book casts an investigative journalist’s spotlight on the individuals, institutions and attitudes that fueled the subprime crisis and subsequent global financial collapse,” she added. “As an industry, we must take note of the convergence of shortcomings pointed out in ‘Black Box Casino.’ If we are to ever restore the industry’s catastrophically injured reputation and prevent a future similar catastrophe, we need to be clear in our understanding of what really happened.”

For IDS executive vice president Mark Mackey, its interest was engaged by the extensive research and objectivity that characterizes “Black Box Casino,” whose author, Robert Stowe England, has a reputation for precision, detail and thorough documentation of his assertions.

“IDS is all about getting the details right on its clients’ docs and disclosures, every time,” said Mackey. “That’s what makes ‘Black Box Casino’ and its author a good fit for our presence at the 2011 MBA Annual Conference. Mr. England’s book should serve as a permanent wake-up call to an industry that has often blinded by its own hubris.”

This event is also being co-sponsored by Depth Public Relations, LLC, (www.DepthPR.com) a provider of reputation management and visibility strategies, including editorial content development for traditional and online media, search engine optimization, and marketing campaigns.

“As a critical reader and thinker on behalf of our clients, I make it my business to draw their attention to worthwhile content, so it was only natural that Mr. England’s ‘Black Box Casino’ became ‘recommended reading’ this summer,” said DepthPR founder and president Kerri Milam. “Further, he is a frequent contributor to our industry’s most respected media, so as a firm, we’ve become serious Robert Stowe England followers.”

“We consider it a privilege to co-sponsor this event for ‘Black Box Casino’ with our valued clients, Titan Lenders Corp. and IDS, during the 98th Annual MBA Conference even as DepthPR marks the 5th anniversary of its founding,” she added.

Registered MBA conference attendees can request and invitation by sending an email to Leslie@DepthPR.com. For more information on Black Box Casino and England, visit http://www.robertstoweengland.com/ .

News Source: Titan Lenders Corp :: This press release was issued on behalf of the news source by Send2Press® Newswire, a service of Neotrope®. View all current news at: http://Send2PressNewswire.com .