You are here: Home › Mayan Elders to Refute 2012 ‘End of the World’ Prophecy
By Send2Press Newswire on October 7, 2011 in California, Entertainment, Events, Holistic and Spiritual, LOS ANGELES, Calif., Press Releases 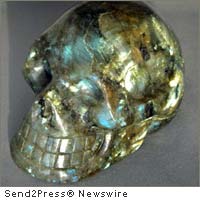 LOS ANGELES, Calif., Oct. 7, 2011 (SEND2PRESS NEWSWIRE) — Oracle Stone Productions announces that on October 26, 2011, Mayan Elder and Priest Hunbatz Men will be in New York City with a team of guardians and their crystal skulls to embark on a journey across the U.S., visiting spiritual locations as they make their way to Los Angeles to join 13 members of the Grand Council of the Maya Itza people from Yucatan, Mexico.

This unprecedented gathering at the “11.11.11 Crystal Skulls World Mysteries Gateway Conference” at the Sheraton Gateway Hotel in Los Angeles on November 11, 2011, will bring people from all over the world to hear the Mayan council bring clarification to the “2012 Prophecy,” which many believe marks the end of the world. Their mission is to create a momentum of positivity that will inspire humanity across the world to listen and prepare for the 2012 global transformation.

During Hunbatz Men and his team’s journey to Los Angeles, they will enter spiritual locations and activate the crystal skulls in his possession. It is believed in the Mayan Itza tradition their ancestors of the past had also stored information and hidden knowledge into the sacred crystal skulls to assist humanity’s transition to a new beginning in other cycles of time.

At the 11.11.11 Crystal Skulls Conference in Los Angeles the 13 member Council of Maya Itza Priest and Elders will release the knowledge of their ancestors to create a gateway to human transformation and assist humanity in the transitional times to come culminating on December 21, 2012.

The Mayan people are considered the “Timekeepers of the world.” They understood mathematics and the value of zero long before its discovery in the Eastern parts of the world. Over the last few years, the “2012 Prophecy” of civilization coming to an end is the result of the “Mayan World Time” calendar ending on December 21, 2012. Others believe it is simply a “change of enlightenment” in this current time. Mayan Elders explain the prophecy as a transition from “The world of the Fourth Sun” to entering the cycle of “The Fifth Sun” due to begin at sunrise on December 21, 2012.

The Mayan believe the fifth sun will be the start of a new era bringing a cosmic flow of energy to cleanse the earth and all that dwell upon it, raising all to a higher spiritual level.

The “11.11.11 Crystal Skulls World Mysteries Gateway Conference” in Los Angeles will be a 3-day ceremonial and activation gathering with people from all over the world to experience the rare opportunity to hear the Mayan council further explain the mysteries of crystal skulls and allow attendees to experience these ancient powerful tools for themselves.

For more information on the conference and ticket sales please contact Kendall Ray Morgan at Oracle Stone Productions at (520) 304-2558 or kinsolar8@yahoo.com or visit www.crystalskullsevent.com.

News Source: Oracle Stone Productions :: This press release was issued on behalf of the news source by Send2Press® Newswire, a service of Neotrope®. View all current news at: http://Send2PressNewswire.com .