You are here: Home › Dick and Dee Dee to Perform at The Paramount Theatre in Denver October 29, 2011
By Send2Press Newswire on October 7, 2011 in Colorado, DENVER, Colo., Events, General Editorial, Music and Recording Industry, Press Releases, Videos 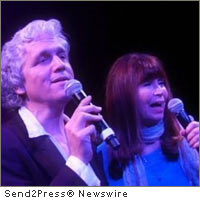 Appearing at a meet-and-greet book signing for internet jock, Cool Bobby Bee’s Doo Wop Conference in Las Vegas, Dee Dee met numerous fans who told her, “We would give anything to hear the songs of Dick and Dee Dee again,” and pleaded with her to resume her career.

Dick and Dee Dee will appear at the Denver Paramount Theatre as part of the Ultimate Doo Wop Show on October 29, 2011 at 8 p.m. Also on the show are: The Fleetwoods, The Crystals, The Marcels, The Olympics, The Edsels, Joe Jones and the Pentagons and the Rama Lama Big Band. These illustrious groups of singers are dedicated to performing their hit songs from the past, and to bringing joy and fond memories to audiences.


News Source: Altergate Publishing :: This press release was issued on behalf of the news source by Send2Press® Newswire, a service of Neotrope®. View all current news at: http://Send2PressNewswire.com .