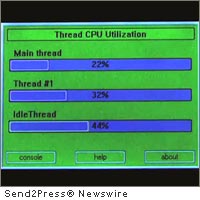 Over 50 Unison demonstration programs run out of the box on MCU development kits in just 10 minutes. Using Unison Version 5.2, you can get instant results. Unison’s new features include:

See the video at http://www.youtube.com/watch?v=yXLyEKrXxx0 .

Unison V5.2 and V4.2 are (http://rowebots.com/products/unison_rtos) hosted on Windows(R) XP, Vista(R) and System7(R) for x86 platforms. Unison support, training and consulting for the entire MCU portfolio is available from RoweBots.

Unison V5.2 and V4.2 are shipping, with free development and deployment offered on the open source version. Commercial licenses for Unison starts at $999 USD.

About RoweBots:
RoweBots is developing the next generation of modular system on chip ultra tiny embedded Linux software for embedded OEM applications in the areas of consumer goods, clean technology, portable products, communications and robotics electronics. The company is based in Waterloo, Canada. For more information, visit the RoweBots web site www.rowebots.com.

Trademarks: Unison is a registered trademark of RoweBots Research Inc. All other product and company names are the trademarks of their respective owners.

– Image Caption: RoweBots integrates automatic code generation for color touch panels which are controlled by the Stellaris MCU and Unison 5.2.


News Source: RoweBots Research Inc :: This press release was issued on behalf of the news source by Send2Press® Newswire, a service of Neotrope®. View all current news at: http://Send2PressNewswire.com .