You are here: Home › A Revolutionary Vision of Creativity, Commerce and Law in the Digital Age
By Send2Press Newswire on October 13, 2011 in Arts, Books and Publishing, Legal and Law, New York, NEW YORK, N.Y., Press Releases 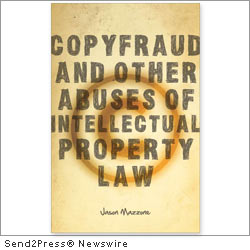 NEW YORK, N.Y., Oct. 13, 2011 (SEND2PRESS NEWSWIRE) — Intellectual property law in the United States is on the verge of breakdown and needs to be reformed, argues law professor Jason Mazzone in his new book, “Copyfraud and Other Abuses of Intellectual Property Law” (ISBN: 978-0804760065), published by Stanford University Press.

Most Americans are familiar with the problems of illicit downloading and stolen software. But Mazzone argues that these familiar problems mask a greater threat to creativity and commerce-the ever-growing overreaching by publishers, producers, artists and corporations that claim stronger ownership rights than the law gives them.

Mazzone argues that something is wrong in a society where:
– Comics can be sued for making fun of Barbie;
– The Hells Angels stop production of Hollywood movies by charging misappropriation of images;
– Major League Baseball announces it can stop any human being from even describing a baseball game;
– Starbucks convinces customers that they don’t have the right to take photos in coffee shops;
– Electronic book and music distributors are stripping away the entire idea of ownership; and
– Universities spend millions of dollars each year requesting permission to reproduce public domain works by long dead authors.

Mazzone shows how growing abuse of intellectual property law has been abetted by confusion, unclear legal standards, outmoded law and economic bullying-and he illustrates the pervasive cost of these abuses. Finally, he introduces specific measures by which we can cure these problems.

Erudite, surprising and accessible, “Copyfraud and Other Abuses of Intellectual Property Law” is a breakthrough title that will change forever how we look at creativity, law and commerce.

Wikipedia founder Jimmy Wales calls “Copyfraud and Other Abuses of Intellectual Property Law,” “a must read for anyone who cares about the future of creativity.”

About the Author:
Jason Mazzone, author of “Copyfraud and Other Abuses of Intellectual Property Law,” is a chaired professor at Brooklyn Law School. He is a graduate of Harvard, Stanford and Yale universities. Before entering academia, Mazzone worked as a law clerk to two federal judges and he practiced intellectual property law with a major firm in New York City. Mazzone serves on the Board of Trustees of the Copyright Society of the USA.

News Source: Jason Mazzone :: This press release was issued on behalf of the news source by Send2Press® Newswire, a service of Neotrope®. View all current news at: http://Send2PressNewswire.com .