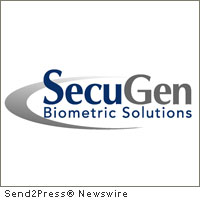 SANTA CLARA, Calif., Oct. 17, 2011 (SEND2PRESS NEWSWIRE) — SecuGen Corporation, a world leading provider of fingerprint sensor technology in the Silicon Valley, announced today that it has added RBH Access Technologies, Inc., RBH USA, Inc., and Apiary, Inc. as defendants in its ongoing patent infringement lawsuit against Suprema. These additional defendants are distributors and OEM manufacturers that make, use, and sell products containing the Suprema sensors that have been accused of infringing SecuGen’s patent, U.S. Patent No. 6,324,020.

The patent-in-suit was issued in 2001 and covers core imaging technology for optical fingerprint sensors that are used in biometric security applications, such as door locks, time & attendance, access control, and labor tracking systems.

Since 1998, SecuGen has made considerable investment in research and development for its core technologies and to develop, maintain, and protect its valuable patents throughout the world including the U.S., Canada, Europe, and Asia. SecuGen’s patents have been tested through previous patent litigation with two separate companies, have been submitted for reexamination before the United States Patent and Trademark Office, and have survived and been strengthened by numerous invalidation attempts.

SecuGen® is a registered trademark of SecuGen Corp. in the United States and other countries.