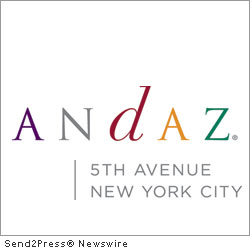 NEW YORK, N.Y., Oct. 18, 2011 (SEND2PRESS NEWSWIRE) — Andaz 5th Avenue, a hotel inspired by the culture of New York City, announces the launch of tbd Art – a rotating art series. The first year of rotating art started on October 6th with artist M.Dreeland. In total, the hotel will have four diverse artists; M.Dreeland, Mister Cartoon, Claw Money and a final artist (currently TBD). Each artist will paint their “View of New York – Today” on the doors leading to the bar downstairs, located on the Fifth Avenue side of Andaz 5th Avenue.

The project is curated by the SA Studios Artist Collective, and art enthusiasts can watch the artists at work and read about their experience by visiting andaz5thavenue.tumblr.com.

Artist M.Dreeland began October 6th:
M.Dreeland, utilizes a pop art style that mixes basic acrylics and techniques from the masters with high-tech tools of the present. M.Dreeland is known for presenting commonly recognizable objects in a new light by distorting images through an abundant use of color and layers of thick paint.

“Being precise and exactly up to the edge is not enjoyable,” says M.Dreeland. “Those little nicks, smudges, and blobs of paint over clean lines make this work limitless.”

M.Dreeland presented his view of New York City on the doors to the bar downstairs at Andaz 5th Avenue. He completed his mural in four days while passersby had the opportunity to view the artist at work on 5th Avenue. M.Dreeland’s work is currently featured at the Time Warner Center in NYC and at Art Basel in Miami this December.

Artist Mister Cartoon begins December 12th:
Guests will discover a new side of New York through the eyes of iconic tattoo and graffiti artist Mister Cartoon. Famous for exposing both the “vicious and vulnerable” side of his work, Eminem, Justin Timberlake and Beyonce have entrusted him to permanently expose some of their most intimate moments on their skin.

Mister Cartoon’s artwork has also been on prominent display in exhibitions such as MoCA’s seminal Art in the Streets exhibit, one of the most in-depth and comprehensive cross-sections of street art to date. Among Cartoon’s contributions is his fully muraled ice-cream truck, a breathtaking showpiece that took a decade to complete.

Additionally, as the hotel’s Tattoo Artist in Residence, Mister Cartoon will be offering guests his services as a tattoo artist. Anyone who books a room at Andaz 5th Avenue during his two week stay will be able to bypass Mister Cartoon’s year long waiting list.

Artist Claudia Gold begins February 12th:
Known as Claw Money, her graffiti alter ego, Gold will combine her eye for fashion with her edgy graffiti style on the doors to the bar downstairs. Claw Money has been tagging the New York City landscape with her iconic Claw tag for the past three decades and has paralleled her street cred into a luxury lifestyle brand. Claudia’s line, Claw Money, features clothing, accessories and sunglasses worn by celebs including Rihanna, MIA, and Nicki Minaj.

tbd Art’s Photographer:
The creation of the murals will be chronicled by photographer Brendan Burke. Brendan’s images will be available on http://andaz5thavenue.tumblr.com – which will also feature blog entries from the artists regarding their work and their experiences creating each of their murals. Additionally, each piece of art will be photographed and turned into limited edition post cards sold for $5 each at the bar downstairs. Proceeds will be donated to charity.

“Art is an integral part of Andaz 5th Avenue and we strive to find new ways to support art and design,” says Jonathan Frolich, General Manager of Andaz 5th Avenue. “We are delighted to launch tbd Art with such a diverse group of talented artists so that guests and New Yorkers alike can experience a unique view of New York City at Andaz 5th Avenue.”

News Source: Andaz 5th Avenue :: This press release was issued on behalf of the news source by Send2Press® Newswire, a service of Neotrope®. View all current news at: http://Send2PressNewswire.com .