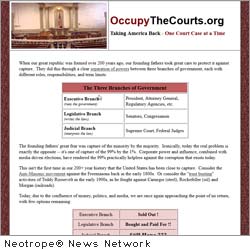 ATLANTA, Ga., Oct. 27, 2011 (SEND2PRESS NEWSWIRE) — Jay Fenello, a homeowner who has been working on a mortgage modification with Bank of America for over 18 months, today announced that he has filed a pro se legal action against the bank, alleging 13 causes of action including Fraud, Bad Faith, Equitable Estoppel, and violating numerous state and local laws, including the Fair Debt Collection Practices Act (FDCPA), the Truth In Lending Act (TILA), and the Real Estate Settlements Procedure Act (RESPA).

He also claims that the bank is violating the Cease and Desist Order that Bank of America signed with the Comptroller of the Currency on April 13, 2011.

The most egregious allegation made by Mr. Fenello is that the purported note holder, a mortgage-backed security, has faced no damages due to the six credit default swaps that insured the performance of tranches within the trust. If true, there would be no basis for the bank’s foreclosure action, and could possibly implicate the bank in a pattern of racketeering.

Concurrent with today’s announcement, Mr. Fenello also announced two new websites, OccupyTheCourts.org and ProSeAction.org. Occupy The Courts is a people-powered movement designed to bring civil court cases against corporate power and abuse, and is an extension of the Occupy Wall Street movement that began on September 17, 2011 in Liberty Square in Manhattan’s Financial District.

Pro Se Action is a companion site designed to help people bring pro se civil actions against corporate power run amok It allows individuals to join together with other like-minded individuals, and to use the power of the Internet to learn, grow, and collaborate.

“The ballot box has been ineffective, our elected officials are of no help, and our regulatory agencies are unwilling or unable to do anything about corporate excesses,” said Mr. Fenello. “Other than marching in the streets, what is a citizen to do?”

The parties to this action (Docket # 11CV2713EV) are scheduled to appear before Judge McElyea of the Superior Court of Cherokee County, State of Georgia on December 4, 2011, at 9:30 a.m. at the Cherokee County Justice Center, Canton, Georgia.

News Source: Jay Fenello :: This press release was issued on behalf of the news source by Send2Press® Newswire, a service of Neotrope®. View all current news at: http://Send2PressNewswire.com .