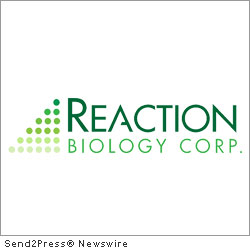 The paper, “Comprehensive assay of kinase catalytic activity reveals features of kinase inhibitor selectivity,” was the product of a collaboration between RBC and the Fox Chase Cancer Center of Philadelphia. The article is currently available online and will be in the November 2011 print edition of Nature Biotechnology.

The data set from the study can be viewed at reactionbiology.com/webapps/kir/.

To perform the study, the researchers selected 178 small molecule kinase inhibitors, including FDA-approved drugs, clinical trial agents and research compounds. These compounds, known to include inhibitors of all major kinase families, were then systematically profiled against 300 human wild-type kinases, also representing all major kinase families. Quantitative analysis of the results revealed that many well-studied kinase inhibitors had significant and hitherto unknown off-target activities. In other words, not only did they inhibit enzymes belonging to the same subfamilies as their putative targets, but they also inhibited kinases from completely different families. 6 compounds, in particular, had off-target inhibition levels stronger than the intended target. These results emphasize the importance of profiling compounds against a broad kinase panel before proceeding to animal studies or clinical trials.

As part of their analysis of the new data set, the authors introduced the concept of a “uni-specific kinase inhibitor.” A compound with a high “uni-specificity” score is one whose inhibition of one particular kinase greatly exceeds its inhibition of the second most inhibited kinase, a stringent measure of compound selectivity. This approach helped to identify many potential lead compounds for “orphan” kinases, enzymes for which few inhibitors currently exist. In a parallel analysis of the data set, the researchers sought compounds whose primary target was a cancer-relevant kinase, but which could also inhibit a limited number of cancer-relevant kinases outside the primary target’s family. Such an approach can serve as the starting point for developing new multi-targeted kinase inhibitors and therapeutics.

“Kinase drug discovery remains a significant interest for both our academic customers and those in the pharmaceutical industry,” said Haiching Ma, Ph.D., Chief Technology Officer of RBC and one of the lead authors. “In the past decade, a large number of kinase inhibitors have been synthesized and published. However, there is no study trying to understand how these compounds interact with a large panel of kinases, especially using the activity-based assay formats used by majority of the kinase research labs. Applying the low-cost, high-throughput HotSpot platform, RBC has created the most reliable kinome-inhibitor database that a ‘gold standard’ radiometric assay format can produce.”

Dr. Ma continued, “This data set will not only help drug discovery activity in the industry, but also provide guidance for selecting the right tool compounds for use in routine kinase biology studies. RBC’s HotSpot provides a vital tool to evaluate these potential drug candidates.”

To date, RBC has developed and optimized assays for over 400 human kinases, including atypical kinases, mutants and lipid kinases that are important drug targets. “RBC is the market leader in providing activity-based screening and profiling. The panel we have collected has 100 more enzymes than most of our competitors,” said Mr. Matthew Oristano, Chairman of RBC. “With this continually growing panel of kinases, we can offer scientists a better understanding of their compounds and reduce the failure rate in future clinical trials. This publication has clearly demonstrated the value of including kinome-wide profiling as an integral part of compound lead validation.”

About Reaction Biology Corp.:
Based in Malvern, PA, RBC is a premier provider of drug screening and profiling services. With over 400 kinases, RBC’s coverage of the kinome is the broadest in the industry for enzyme activity assays. Using its proprietary HotSpot(SM) technology and other innovations, RBC is also expanding its services to cover a broad range of epigenetic regulatory enzymes, including HDACs, HATs, HMTs, DNMTs, demethylases and epigenetic readers. RBC provides its services to over 200 customers worldwide, including large pharmaceutical, biotech, government and academic labs.

HotSpot is a service mark of Reaction Biology Corp.

News Source: Reaction Biology Corporation :: This press release was issued on behalf of the news source by Send2Press® Newswire, a service of Neotrope®. View all current news at: http://Send2PressNewswire.com .