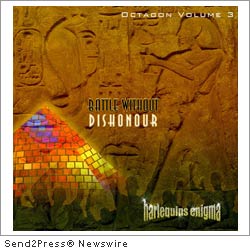 BERGEN, Hordaland, Norway, Oct. 31, 2011 (SEND2PRESS NEWSWIRE) — Harlequins Enigma is back again, This time with their third volume in the octagon series: “Battle Without Dishonour.” Battle Without Dishonour is an instrumental hip hop album and contains some of Age Rissnes’ all-time favourite tracks in the dance genre.

Age Riisnes mastered hami, commune and wolf in his home studio. An additional final tweak on “at point blanche” were done in the last minute. Also by himself. Artists involved in octagon volume 3 are: Katie Leung, Sara Jensen, Elin Berge, Sharien, Sara Q and the Harlequins Enigma owner himself, Age Riisnes. A single has also been released in the title track “Battle Without Dishonour.”

Harlequins Enigma refuses to leave the dance scene as of yet, but will together with the two octagon volume 2 dance albums stand ground & prepare remasters in the future for various personal favourites, as singles & maybe new compilations. The octagon vol. 2 albums are available in major mp3 stores.

In the beginning in may 2008, Harlequins Enigma had some involvement with Maniacs of noise, but the co-operation ended shortly after, Where Age Riisnes, Elin Berge, Sara Jensen and a little later on Katie Leung did co-ops and sessions with Klaus Schulze, Jean Michel Jarre, Tangerine Dream, Jan Garbarek, Dave Weckl, Kitaro, Vangelis, Tori Amos and several others. 430 16-bit tracks and 170 8-bit tracks were made in this period from may 2008 until february 2010. Night Lights was then released in August 2010. Earlier they released twenty-three free music videos. The videos “Sun Moon Stars” and “Million thrills” were taken down, due to a mix-up in Katie’s name and an issue with Oistein Eide. “Sun Moon Stars” have been re-released at a later time, and Million Thrills have also been re-released on the “Alt” album recently.

New years eve 2010 Dark light is released, and marked a bad decade with hopes for the future. Stargazer 1 – Moon phase was released in 2011 as video #24, this one a commercial one featuring Klaus Schulze and Jan Reidar Riisnes. 8 singles and 10 albums have been released since new year. The albums are: Ruby and jade photograph, Lyra, Stargazer, Heartbeat, Octagon volume 1. The following 3 were best of albums in a series called “The Journey of Harlequins Enigma.” Octagon volume 2 triple dance album and EP followed with radical “Alt” in between. with the release of albums like “Alt” and Octagon volume 3 – they seek third parties who like alternate music.

Harlqeuins Enigma announces a break in the octagon series after their octagon volume 3 release. Their reason is simply financial, but they will be back with the continuance of the 5 last octagon volumes, plus also 3 volumes called TD Sound 1,2 and3, Involving Tangerine Dream and ex Tangerine Dream members. There will also be a release of Catmint, a mixed genre double album, all spoken of as great compilations. Mastered versions of earlier albums are also planned.

News Source: Harlequins Enigma :: This press release was issued on behalf of the news source by Send2Press® Newswire, a service of Neotrope®. View all current news at: http://Send2PressNewswire.com .