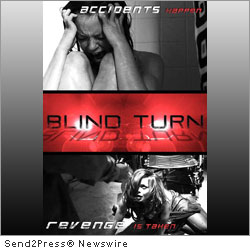 According to the U.S. Department of Transportation, National Highway Traffic Safety Administration, nearly 30 people die each day in motor vehicle crashes that involves an alcohol-impaired driver. This amounts to one death every 48 minutes.

In turn, Mothers Against Drunk Driving (MADD) serve one victim or survivor of drunk driving every nine minutes.

“Drunk driving is a big problem in our society,” says Jay Dee Walters, the film’s co-star and executive producer. “We hope that this movie will not only entertain viewers, but also drive home a very important, take-away message.”

“Blind Turn” stars Rachel Boston as Samantha Holt and Walters as Bruce Miller. Samantha has experienced a tragic event resulting from one too many cocktails at a Christmas party. Her seemingly perfect life has now taken a turn for the worse.

One year later, enter Bruce, Samantha’s nemesis. He was once a devoted family man, but has now turned demented teacher of a valuable life lesson. He kidnaps Samantha and takes her hostage while administering a series of escalating sobriety tests. He wants to demonstrate the consequences of DUI and DWI. Powerful imagery accompanies many of the disturbing and chaotic scenes.

“The movie was originally named, ‘Point Zero Seven’ because Samantha blows this during her blood alcohol content (BAC) test, but as the film evolved so did the name,” explains Walters.

For instance, on average, a BAC of 0.06-0.09 may alter a person’s behavior to include blunted feelings, less social restraint and extraversion. And, it may affect reasoning, depth perception, peripheral vision and glare recovery.

In a nutshell, “Blind Turn” is about personal devastation, life and death decisions, guilt, regret and forgiveness. It is also about the inter-connectivity of the world and how personal decisions can affect innocent people.

And while accidents may happen, so does revenge.

“Blind Turn” was shot in Shreveport, LA and is 86 minutes in length; the trailer simply teases and leaves viewers aching for more. It may be viewed on YouTube at: http://www.youtube.com/watch?v=SfijY8gi_EY .

News Source: Point Zero Seven, LLC :: This press release was issued on behalf of the news source by Send2Press® Newswire, a service of Neotrope®. View all current news at: http://Send2PressNewswire.com .