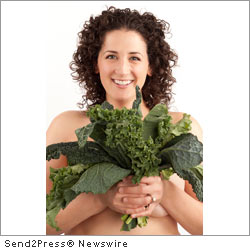 SAN JOSE, Calif., Nov. 16, 2011 (SEND2PRESS NEWSWIRE) — What do Hope Solo, Blake Griffin, Jose Reyes, Gretchen Bleiler and Lacy Young have in common? They all appeared in the buff recently to celebrate their bodies. Lacy Young isn’t a famous athlete with national endorsement deals, nor is she admired by millions of fans. But she felt the need to bare it all in the name of eating healthy.

“I was looking at The Body Issue of the ESPN Magazine, and that’s when the idea struck me. Seeing all these athletes bare it all and embrace their bodies in a tasteful way really inspired me. I thought, ‘Why don’t I do that with kale and carrots?'”

Young is referring to the annual bodies issue produced by ESPN: The Magazine where certain athletes are chosen to appear in the nude with or without props. The issues have proven to be very popular among sports and non-sports fans alike.

“I wanted to do the same with my body,” Young stated. “I wanted to bring attention to loving your body for what it is. It took me nearly 32 years to be able to say that confidently and I don’t know if I would’ve said that without having learned how to feed myself loving foods first,” Young concluded.

“Eating the right foods to feed my body changed my life, and I wanted to do the same for others,” she added.

Lacy then enrolled herself at the Institute of Integrative Nutrition in New York City. Young’s philosophy is simple: “It’s all about adding in and crowding out. I help clients add in healthy food and lifestyle choices and allow the unhealthy choices to just fall away.”

In short, Young believes that it’s about loving your body and food is a gateway to achieving that. “Many people are emotional eaters and the more they eat, the less they love their bodies. I’d like to change all that. I’d like to begin a campaign where women shed their clothes and pose with their favorite fruit or vegetable,” Young added. “How liberating would that be?”

So Lacy Young is on a campaign to liberate women’s bodies as well as their minds. If you would like to be part of Lacy’s campaign, you can send your photos to www.lacyyoung.com . Please visit the website’s homepage for rules and regulations. Young is also available for one-on-one and group coaching.

News Source: Lacy Young :: This press release was issued on behalf of the news source by Send2Press® Newswire, a service of Neotrope®. View all current news at: http://Send2PressNewswire.com .