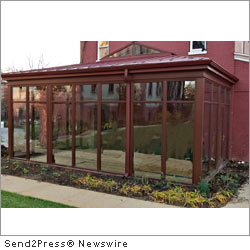 WASHINGTON D.C., Nov. 21, 2011 (SEND2PRESS NEWSWIRE) — Conservatory Craftsmen is honored to have been chosen to work on the Hill Center project with Bell Architects to restore the Old Naval Hospital on Capitol Hill.

“The Old Naval Hospital had fallen into a state of disrepair,” says Jim Hewitt of Conservatory Craftsmen. “Once considered one of the most valuable assets on the Hill, the building had become one of the district’s most endangered historic places.”

As a result, in 2000, a group of concerned Hill residents banded together to save the Old Naval Hospital and restore it to its original splendor. Working with Bell Architects, a restoration plan was adopted that would completely restore the building along with the grounds and carriage house.

Bell Architects had worked with conservatory historian and craftsman, Hewitt, on previous projects and was familiar with his penchant for authenticity. So, he was called in to join forces on the project.

“Jim is a true, old-school conservatory craftsman who understands the history of conservatories and their design periods,” says T. David Bell. “His ability to grasp the design nuances of this restoration was never in doubt.”

Completed in 1866, the Old Naval Hospital was a 50-bed facility designed to serve seamen serving on the Potomac River and its tributaries. Later, it would serve many purposes such as a Hospital Corp Training Center and an Old Soldiers Home. By 1998, the main building stood vacant, while the carriage house was rented as an administrative office.

Redesigning a conservatory for the carriage house at the old naval hospital is a great honor for Hewitt and his crew.

“Using our knowledge of conservatory history and design is what we live for,” explains Hewitt. “While other companies have gone the route of cheap kits and materials, we’ve stayed true to the art of building authentic conservatories and it’s nice to be recognized for that craft.”

Conservatory Craftsmen was given access to archived photos of the original conservatory. From those visuals and evidence of the original structure left behind on the carriage house, they designed an authentic, modern era conservatory that brings back its original charm with the incorporation of modern, practical features such as low E tempered glass for insulation and safety.

“It’s an honor to be called in on a historic project like the Hill Center,” says Hewitt. “Being able to play a small part in the mission of the Hill Center is a dream. This place will be a historical hub to educate and draw people together.”

– Photo Caption: Restored Conservatory on the Carriage House of The Hill Center.

News Source: Conservatory Craftsmen :: This press release was issued on behalf of the news source by Send2Press® Newswire, a service of Neotrope®. View all current news at: http://Send2PressNewswire.com .