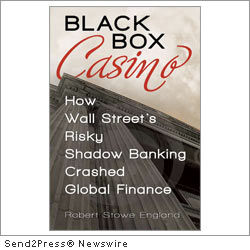 MILTON, Del., Nov. 22, 2011 (SEND2PRESS NEWSWIRE) — Financial author Robert Stowe England turned a spotlight on the role of key institutions, policies, agencies and people in Washington and on Wall Street that pushed the financial system toward the mortgage meltdown and 2008 crisis in remarks at a book signing event Nov. 5 at the Federal Street Gallery in the historic town of Milton, Delaware.

England, an acclaimed financial journalist, has described the root causes of the crisis and the harrowing events that toppled institutions and markets in his new non-fiction financial thriller, “Black Box Casino: How Wall Street’s Risky Shadow Banking Crashed Global Finance” (ISBN: 978-0313392894; hardcover; Praeger). The author’s remarks have been posted at YouTube http://www.youtube.com/watch?v=BRZI5BvgPro .

“Something had gone terribly wrong to deliver us into the world of Mad Max, where the norms we thought necessary for society had vanished,” Mr. England said. “We saw financial institutions crashing all around us while authorities seemed powerless to do anything about it.”

England, who covered the crisis as senior writer for Mortgage Banking magazine, recounted how the mortgage banking industry was transformed from one ruled by the discipline of the “invisible fist” of the free markets in the early 1990s to one that had generated $4.7 trillion in risky assets by mid-2008.

Chief among the villains England cited is Congress for enacting a regulatory regime for Fannie Mae and Freddie Mac in 1992 that put rules in place that rewarded politicians for demanding ever-rising affordable housing goals achieved through ever-declining lending standards. Fannie and Freddie were given weak financial standards and a weak regulator who could not compel them to take steps needed to ensure their safety and soundness.

After accounting scandals emerged at both Fannie and Freddie in the early 2000s, top-level officials were not held to account by Washington and walked away with hundreds of millions of dollars in ill-gotten gains. This “sent a dangerous signal, I think, to others who contemplated fraudulent schemes. Rewards could be huge and the potential downside limited,” the author said.

England also faulted the Securities and Exchange Commission for its lax enforcement of laws against fraud and market manipulation and recounted how naked short sellers engaged in illegal activity that brought down first Bear Stearns and then Lehman Brothers.

England also cast a light on the foibles of Wall Street. “Merrill Lynch and Citigroup were the kings of CDOs (collateralized debt obligations) and bear much of the blame for the crisis,” he said. The subprime CDO was “the biggest bait and switch of all time” because it turned low-rated subprime mortgage bonds into AAA credits, which were then sold to many unwary Asian and European investors, England said.

An excerpt from England remarks: The demand from CDOs for weaker subprime credits – usually only a fraction of each deal – had a perverse effect. It greatly increased demand for mortgage lenders to increase the volume of overall subprime and risky mortgages to supply the bonds needed for the CDOs. In short, the subprime CDO business was poisoning the private label mortgage-backed securities business. In an outcome James Bond villain Goldfinger would love, Wall Street was creating a flow of funds into the mortgage industry in search of bad credits.

News Source: Robert Stowe England :: This press release was issued on behalf of the news source by Send2Press® Newswire, a service of Neotrope®. View all current news at: http://Send2PressNewswire.com .