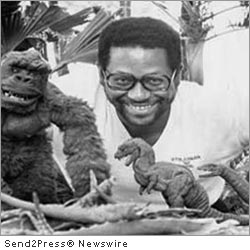 LOUISVILLE, Ky., Nov. 23, 2011 (SEND2PRESS NEWSWIRE) — Few knew, except for the late Samuel Z. Arkoff, this Indie’s success story of a non-traditional genre for an Afro-American. Names like Spike Lee and John Singleton are not known for such special effects. Yancey Hendrieth, of Hendriethfilm, Ltd., Enterprises, is a new breed of black filmmaker, having more in common with Dino De Laurentiis and Peter Jackson, creators of two “King Kong” movies.

Anyone can preview a running time of 4:48, of Yancey Hendrieth’s special effects on YouTube. Search: King Kong Horror Comedy by dinosaurmoviefans.

DVD is available by distributors via http://www.dinosaurmoviefans.com . Yancey Hendrieth is owner of this website dba Hendriethfilm, Ltd., Enterprises. Anthony Hendrieth is brother and Co-Producer. Both were Connecticut natives. Yancey’s “Cult Classic” was created by modest means without hydraulic engineering.

Quotes by the late Samuel Z. Arkoff, producer of “Mad Max” and more Hollywood Films than anyone, are handwritten inside the cover of Yancey’s most prized possession, “Flying Through Hollywood By The Seat Of My Pants,” an autobiography: “Dear Yancey, It’s been a good life for me in an interesting game. I’m delighted that you grew up watching my movies. In a sense, so did I. I wish you same kind of luck I’ve had. Best regards, Sam Arkoff.”

Against all odds by modest means, Yancey Hendrieth is the First Afro-American Independent Outside The Hollywood Studio System using animation stop motion models, mechanical and visual effects in this KING KONG horror spoof.

The 6th Annual 2007 Rondo Award Nomination for his “LOST ON ADVENTURE ISLAND” has potential to attract studios to produce his pink female parody of THE HULK, entitled INCREDILE PINK WOMAN.

News Source: Hendriethfilm, Ltd., Enterprises :: This press release was issued on behalf of the news source by Send2Press® Newswire, a service of Neotrope®. View all current news at: http://Send2PressNewswire.com .