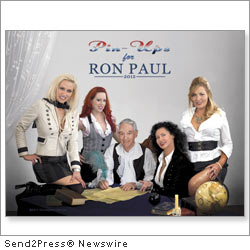 Twelve women from all across the country are featured; students, writers, artists, and businesswomen, every one an outspoken activist for peace and freedom!

The calendar’s creator, Juliet Annerino, explains, “This is a pretty package for a powerful message. Peace + Freedom = Beautiful!”

20 percent of all proceeds go in support of Dr. Paul’s run for the presidency in 2012.

The calendar was recently featured on The Colbert Report, Politico.com and the New York Daily News.

Juliet Annerino, along with several of the Los Angeles-based Calendar Girls are hosting a “Holiday Party with the Pin Ups for Ron Paul” free event in Hollywood, Wednesday, November 30, 7 p.m.- 11 p.m. at Cafe Entourage, 1600 Vine St., Los Angeles, CA 90028. They welcome the press for interviews and photos, in the upstairs VIP section.

(*NOTE: Independently produced and not affiliated with the official Ron Paul Campaign.)

News Source: Juliet Annerino :: This press release was issued on behalf of the news source by Send2Press® Newswire, a service of Neotrope®. View all current news at: http://Send2PressNewswire.com .