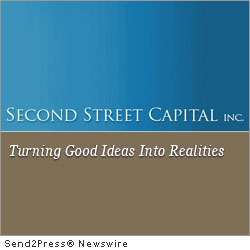 VERO BEACH, Fla., Dec. 6, 2011 (SEND2PRESS NEWSWIRE) — Second Street Capital, Inc. (SSCI), a publicly traded company, that suffered through the housing and credit crises beginning in 2007, has recently begun the process of recapitalizing and will soon begin operating as a specialty finance company, providing working capital to small and medium size local businesses and entrepreneurs. SSCI is headquartered in Ft. Lauderdale; however, Jack Rodgers, Maria Caldarone, and Laura Camisa all members of the management team will operate from a Vero Beach office.

SSCI is a value oriented lender focused specifically on small to medium sized companies and projects. SSCI helps to facilitate the flow of capital to community based companies in order to support job growth, share prosperity and increase the local tax base.

“We look forward to both, contributing to the local economy directly by operating our company and indirectly, as the result of capitalizing on strong local companies,” said Maria Caldarone, also an Executive Vice President with SSCI.

* A new Board of Directors and management team has been appointed.

* SSCI’s primary business focus will be to operate as a specialty finance company providing asset based lending to small businesses, export trading companies and small and medium sized homebuilders and developers.

SSCI’s Board of Directors now consists of Mr. Meyer, Mr. Caldarone, George Henderson and Maria F. Caldarone, who has served as an Executive Vice President of Calton since September 2002 and will continue serving in that capacity. Other members of the management team include Thomas Lunak, who will serve as President and Chief Operating Officer, Jack Rodgers and John Bock, who will serve as Executive Vice Presidents, and Laura Camisa, who has been appointed Chief Financial Officer. Ms. Camisa previously served as Calton’s Chief Financial Officer from April 2004 through September 2007.

Certain information included in this press release may contain forward looking information that is subject to certain risks, trends and uncertainties that could cause actual results to differ materially from expected results. Among these risks, trends and uncertainties are SSCI’s ability to raise capital, risks associated with SSCI’s new business plan, national and local economic conditions, including conditions in the homebuilding and construction industry, conditions and trends in the real estate industry in general, changes in interest rates and other factors.

News Source: Second Street Capital, Inc. :: This press release was issued on behalf of the news source by Send2Press® Newswire, a service of Neotrope®. View all current news at: http://Send2PressNewswire.com .