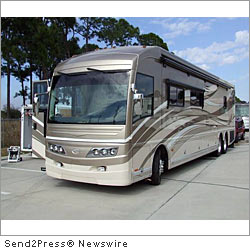 FORT LAUDERDALE, Fla., Dec. 7, 2011 (SEND2PRESS NEWSWIRE) — Airfares have been steadily on the rise and weary travelers are searching for alternative means of travel as holiday season approaches. Rob Tischler, CEO of Allstar Coaches said “When considering the cost of airfare, hotels, and meals out, it’s no wonder that people are turning to RV rentals. The savings are substantial, even when you incorporate fuel costs. A family of four can literally save thousands over traditional air-hotel itineraries.” With such a dramatic rise, the search for alternatives is at a fever pitch. People are better looking at trains, buses and recreational vehicles.

Lynn Thompson, an RN out of Fort Lauderdale found that “renting a motorhome is a cost effective, more comfortable and less stressful alternative to traveling by plane.” Travelers also appear to be getting very frustrated with the invasive searches, missed connections and outrageous fees when flying. “The last time I flew,” said Thompson, “I had to pay $20 extra per seat so my family could sit together, then they lost my luggage for which I had to pay extra as well, and my 86 year old grandmother was singled out and publicly humiliated when an overzealous security agent became suspicious of her colostomy bag. Another time, our flight was delayed and we just sat on the tarmac for hours.” Thompson also noted that she was able to save almost $2,000 by preparing their own meals in her RV, eliminating the expensive hotels and restaurants.

Industry insiders believe that the increased demand in RV travel can be attributed to an educated consumer base that is tiring of the rampant nickel and diming and stress associated with air travel. According to farecompare.com CEO Rick Seaney, “The average fare for holiday flights is up as much as 20 percent over last year.” People are beginning to realize that there are other choices and they want to maximize their travel experience.

Allstar Coaches operates their fleet of luxury motorhome rentals from strategically located depots in nine states. With full kitchens, luxurious cabins and modern technology, these vehicles are equipped to exceed the expectations of even the most discerning traveler.

“Folks are starting to figure out what many motorhome enthusiasts have known for years; that the benefits of motorhome travel far outweigh the costs,” says Von Isanogle, Fleet Operations manager at Allstar, “and that is contributing to increased sales. Record breaking airfares and those crazy fees are only helping to take them off the skyways and put them onto the highways.”

News Source: Allstar Coaches :: This press release was issued on behalf of the news source by Send2Press® Newswire, a service of Neotrope®. View all current news at: http://Send2PressNewswire.com .