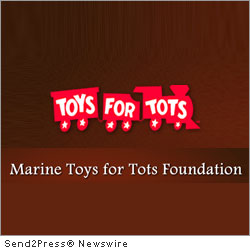 WASHINGTON, D.C., Dec. 9, 2011 (SEND2PRESS NEWSWIRE) — The Gingrich Foundation is proud to honor the Marine Toys for Tots Foundation as its December Charity of the Month. Toys for Tots distributes millions of gifts each Christmas to brighten the holidays of our nation’s less fortunate children.

Colonel William L. Hendricks, USMCR, founded Toys for Tots as a pilot program in 1947. The Marine Corps expanded his project just one year later into a national effort and called upon Marine Corps Reserve units to conduct Toys for Tots campaigns in their local communities.

Six decades later, Toys for Tots continues to thrive. Today, the program reaches all 50 states, and invites communities without a reserve unit to conduct approved Toys for Tots campaigns.

“We are very pleased the Gingrich Foundation has decided to name the Marine Toys for Tots Foundation as their Charity for the Month of December,” said retired Marine Major Bill Grein, Vice President of the Marine Toys for Tots Foundation. “With this additional exposure we will reach many civic-minded people who share our interest in helping fulfill the Christmas holiday dreams of our nation’s neediest children; children who might otherwise be overlooked this year.”

“Toys for Tots is a wonderful American tradition,” said Callista Gingrich, President of the Gingrich Foundation. “Newt and I are honored to support an organization that helps raise the spirits and hopes of those in need at Christmas.”

To date, Toys for Tots has distributed more than 450 million toys to more than 200 million children — an extraordinary accomplishment.

The Gingrich Foundation is a domestic non-profit corporation founded by Callista and Newt Gingrich to support charitable purposes.

Charity of the Month, Gingrich Foundation, Toys for Tots

Searching Moving Companies Made Easy at Got Movers with Its Relaunch
Energy Optimizers, USA Responds to Energy Sector Growth