You are here: Home › Aloha Wanderwell: First Woman to Travel around the World in an Automobile
By Send2Press Newswire on December 15, 2011 in Automotive, California, Internet, IRVINE, Calif., Movies and Film Making, Press Releases, Videos 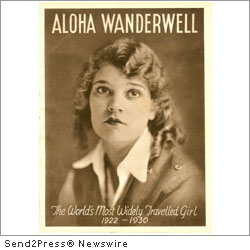 IRVINE, Calif., Dec. 15, 2011 (SEND2PRESS NEWSWIRE) — What’s blonde, blue-eyed, six-feet tall and looks like a leading actress? She’s Aloha Wanderwell – the first woman to travel around the globe in a car; she was 16. And, AlohaWanderwell.com is dedicated to preserving her nitrate films, books and more.

It all started when Aloha read an ad in the Riviera edition of the Paris Herald: “Brains, Beauty and Breeches – World tour offer for lucky young woman wanted to join an expedition – Asia, Africa….”

She quickly set out to convince the expedition’s leader, Captain Walter Wanderwell, that she was the one for the job.

“This true story of an incredible journey – the Wanderwell Expedition – took place in the 1920s. Over the years, it’s been buried and now needs to be preserved and retold,” says Richard Diamond, Aloha’s grandson.

During this world tour, Aloha took thousands of feet of 35-millimeter nitrate film while driving though 43 countries on four continents in nearly eight years.

“These nitrate films have to be transferred to HD,” says Diamond. “We need help now. This is a gold mine of material for any documentary or film producer. It would be a crime to let these historical films deteriorate. It’s a rich part of history.”

In addition, Diamond also possesses a 567-page manuscript written by Aloha that details the trip’s many adventures; an array of collectibles; photos; and the original auto badges.

During the expedition, Aloha and Walter married. They continued to travel, to film and lecture together. In 1932, their story tragically ended with Walter’s murder; it remains an unsolved cold case.

Aloha remarried and tended to her priceless collection of films, photos, journals and artifacts. Much of her work has been preserved in museums and educational institutions throughout the U.S. She passed away in Newport Beach, California on June 4, 1996.

“In addition to preserving these items, I believe that Ford has an amazing opportunity here,” says Diamond. “Just imagine a modern-day Aloha retracing these steps in a Ford Explorer? It would be a wonderful way to pay homage to the very first ‘Ford Challenge’ – the intrepid 1918 Model T that Aloha referred to as her, ‘Little Lizzie.'”

So, while the Model T that brought this couple together was not preserved, the story certainly can be.

AlohaWanderwell.com has partnered with CMG Worldwide: http://cmgworldwide.com/news/?tag=aloha-wanderwell to provide information about and licensing opportunities regarding the Wanderwell Expedition.

To learn more, watch the YouTube video: http://www.youtube.com/watch?v=g-PAVV8Kym0 – or visit www.AlohaWanderwell.com which is filled with hundreds of photos, more videos, a comprehensive trip timeline, biographical facts and much more – or check out Facebook: http://www.facebook.com/AlohaWanderwell .