You are here: Home › Education Behind Bars – A Win-Win Strategy for Maximum Security, by Christopher Zoukis
By Send2Press Newswire on January 4, 2012 in Books and Publishing, Education, Legal and Law, Press Releases, Virginia 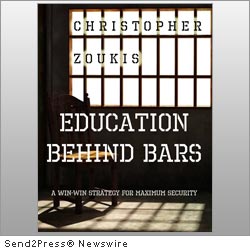 PETERSBURG, Va., Jan. 4, 2012 (SEND2PRESS NEWSWIRE) — Why should the American taxpayer care about people who are incarcerated in our prison system? Simple, it is a true cost-saving measure that should be discussed. In “EDUCATION BEHIND BARS” (ISBN: 978-1934597774; Sunbury Press; January, 2012) author Christopher Zoukis makes the case for why all Americans should support education in our prison system. Most Americans do not realize that the United States could save upwards of $60 billion each year by simply educating prisoners.

According to the Journal of Correctional Education, the U.S. incarcerates over 2.3 million persons, a number equal to 5 percent of the country’s population. The U.S. accounts for 25 percent of the entire incarcerated population worldwide. Each of these millions of prisoners costs the American taxpayer between $32,000 to $40,000 each year in food and housing.

Of those 2.3 million prisoners, around 800,000 will be released each year and most, that is a staggering 70 percent to 85 percent will return to prison within five years. The exception is prisoners who receive education in prison.

The same study found that a prisoner with an Associate’s degree reduces the rate of recidivism and return to prison to 13.7 percent and those with Bachelor’s degree to 5.6 percent. Prisoners who have attained a Master’s Degree have a 0 percent chance of returning to prison. The Institute for Higher Education Policy calculates the cost of educating one prisoner to be $2,000 to $3,782 per year which is done mostly via distance learning/online. This additional cost is drastically lower than the $40,000 per year costs in simply incarcerating a person.

One fact that should make all Americans think twice: The United States spends $30.1 billion each year to build more prisons. This is money that could be used in more productive ways that benefit the taxpayer.

News Source: Christopher Zoukis :: This press release was issued on behalf of the news source by Send2Press® Newswire, a service of Neotrope®. View all current news at: http://Send2PressNewswire.com .