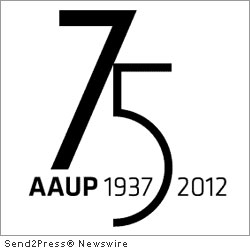 NEW YORK, N.Y., Jan. 18, 2012 (SEND2PRESS NEWSWIRE) — The Association of American University Presses (AAUP) celebrates the 75th anniversary of its founding in 1937. AAUP is an organization grounded in a tradition of service, whose members engage in forward-looking publishing programs and innovations. Both the history of the association and the future of scholarly communications will provide focus for a series of events, including a “University Press Week” in November 2012, to mark the occasion of the AAUP 75th anniversary.

AAUP President MaryKatherine Callaway (Director, Louisiana State University Press) states: “Over the past 75 years, the AAUP has promoted collaboration among its member presses and worked to help them explain the significant role university presses play. Not only do we contribute to the academic process, but many presses also examine and explain the culture and history of their region, and all AAUP members publish books that educate, inform, and enlighten. The organization also continues to assist its presses to make sense of an increasingly complex publishing landscape, providing a forum for the exchange of ideas, information, and expertise.”

What is the Association of American University Presses?

AAUP can be defined by both its members and its mission. In 1937, a dozen or so university presses, representing institutions across North America, appointed officers to a new association, formalizing the ad hoc conversations between scholarly publishers that had been taking place since the 1920s. Today, AAUP represents 134 nonprofit scholarly publishers from 10 countries. While most AAUP members are presses sponsored by or based at universities, a significant number are independent publishers, or the publishing arms of societies, museums, and think tanks, that share the mission and standards of AAUP.

AAUP members publish books, journals, and new forms of scholarly work across all fields of inquiry from the humanities and social sciences to mathematics, medicine, and technology, and often support emerging and interdisciplinary scholarship. AAUP presses range greatly in size, from those publishing 2-5 new titles each year, to those who produce in excess of 2000. Each press shares a commitment to serve society, the academy, and their community through disseminating works of scholarship, art, and thought.

AAUP’s mission is to assist its members through professional education, cooperative services, and public advocacy. “Our mission has remained consistent over the past 75 years,” says AAUP Executive Director Peter Givler, “although what the association does to support that mission evolves along with publishing trends, new technologies, and the shifting landscape of scholarly communications.”

Throughout 2012, AAUP will dive into its archives to refresh institutional memory, through online features and articles about the milestones and important programs that have shaped the association. Today, January 18, marks the date in 1928 when 12 university presses met and decided on the first cooperative project of the ad hoc group, a combined catalog of university press books titled “Shelfward Ho!” Every thoughtful publisher and scholar knows, however, that while an understanding of the past is vital, it is the work of today and tomorrow that holds the most importance for the next 75 years of nonprofit scholarly publishing.

“Progress and a cohesive spirit” was the how Publishers Weekly characterized AAUP in 1967, and this can serve as a motto still today. At the 2012 AAUP Annual Meeting in Chicago (June 18-20) and during the inaugural “University Press Week” (November 11-17), the association, its members, and its wider community will engage the present and future of AAUP and scholarly communications.

Information on the 134 members of AAUP can be found here: http://www.aaupnet.org/aaup-members/membership-list .

News Source: Association of American University Presses :: This press release was issued on behalf of the news source by Send2Press® Newswire, a service of Neotrope®. View all current news at: http://Send2PressNewswire.com .