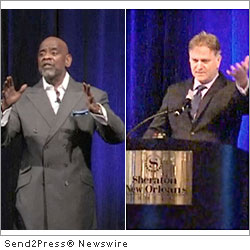 KIRKLAND, Wash., Jan. 24, 2012 (SEND2PRESS NEWSWIRE) — Christopher Gardner, played by Will Smith in “The Pursuit of Happyness” (Columbia Pictures, 2006), was jobless and homeless with a baby boy to support. He bounced back, gaining wealth and a future for his son. Inspired by this example, LTC Financial Partners LLC (LTCFP) invited Gardner to speak at the company’s annual meeting, held this year in New Orleans, January 13-15. “We’re bouncing back from a setback of our own,” says Cameron Truesdell, LTCFP’s CEO. “And we need to think like Chris.”

There are key parallels between Gardner and LTCFP:

AN UNEXPECTED SETBACK: When, as a young father, Gardner was offered an internship with a stock brokerage, he quit his job for the chance to get rich in the stock market. He was on his way! But when he reported for work, the man who hired him was no longer with the company. Gardner was out in the cold, unable even to claim unemployment. Setbacks such as these led to his wife leaving him, followed by homelessness and a child in diapers to care for.

In 2010 LTCFP was on its way too, leading its industry in growth and making the Inc. Magazine list of America’s 5,000 fastest-growing companies for three years in a row. Then LTCFP’S biggest client, a $15 million account, suddenly dropped out. That made 2011 the company’s first down year since its formation in 2003.

COMEBACK MAGIC: Though homeless and without training, Gardner aspired to make it big as a stock broker. He never deviated from this goal and would later give advice such as “Make your dream bigger than yourself and never underestimate the power of vision.” Throughout the leanest years, Gardner took any menial job he could find to feed himself and his boy while looking for stock-market opportunities. Eventually he landed a spot in a training program with Dean Witter Reynolds, but never earned enough to make ends meet. Yet he persisted, eventually landing a position with Bear Sterns & Co., where he became a top earner. In time he achieved wealth and international fame as rags-to-riches stockbroker and motivational author.

Like Gardner, “I’m incredibly optimistic about what we have coming up,” says Truesdell. “When one door closes another opens. But we’re not just cracking the door open, we’re crashing through it. The things our people have already accomplished have taken my breath away.” Following a brief period of necessary belt-tightening, LTCFP has pursued many bullish initiatives.

These include:
* Uninterrupted acceptance of qualified new agents,
* An increasing flow of leads for agents through Internet, direct-mail, corporate, association, and alliance-partner sources.
* Undiminished marketing and public relations support,
* Redoubled emphasis on telemarketing and Internet sales,
* Creation of a new division, the Worksite Academy, to promote long-term care insurance as an employee benefit,
* Sponsorship of the “3 in 4 Need More” campaign and launching of “3 in 4” themed seminars, to build awareness of the need for long-term care planning,
* Increased revenue from LTCFP’s affiliate Reverse Mortgage Direct, which turned profitable after just two years, and
* Introduction of a new Annuity and Life Insurance division.

“Everyone has challenges and setbacks,” says Truesdell. “And we all have the power to get back to where we want to be.” He and Gardner agree that vision and focus are important, but that consistency and extra effort are absolutely vital too.

Quoting from the book, “212: The Extra Degree” by Sam Parker, Truesdell says, “At 211 degrees, water is hot, but at 212 degrees, it boils. With boiling water comes steam, and steam can power a locomotive.” One extra degree of effort makes all the difference, he asserts. “This simple analogy gives the definition of excellence, separating the great from the good. LTCFP aims to be great.”

Video highlights of the LTCFP annual meeting may be found at http://www.youtube.com/watch?v=RD7-pUg1SHs . For information on opportunities with the company, visit http://www.ltcinsurancecareer.com .