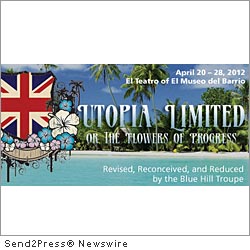 Before there was Arab Spring and Occupy Wall Street, there was Utopia Limited. Although it was written over a century ago, the work features scathing political satire and demonstrates a level of resonance with current events, world finance, and global politics that is positively eerie.

Tickets to Utopia Limited range in price from $28 to $100 and are available online at www.bht.org or by calling 866-811-4111. Payment in excess of $20 per ticket is tax-deductible to the extent provided by law.

The Blue Hill Troupe is New York City’s only musical theater group to donate its net proceeds to charity. Proceeds from Utopia Limited will benefit “I Have A Dream” Foundation(R) – New York Metro Area http://www.ihaveadreamfoundation-ny.org .

In addition to ticket sales, the Blue Hill Troupe raises money for its charities through paid advertising in the 200-page glossy show program. For more information, visit http://bht.org/advertise.php .

For over thirty years, IHDF-NY has been sponsoring entire grade levels of students in under-resourced public schools and housing developments, and working with these “Dreamers” from early elementary school all the way through college. Upon high school graduation, each Dreamer receives guaranteed tuition assistance for higher education. By helping Dreamers gain access to college, IHDF-NY is putting them on different academic and life trajectories, while having a broader impact on the students’ families and the generations that follow.

The Blue Hill Troupe is currently accepting proposals for its charity partner for the 2012-2013 season. Visit http://bht.org/charityselect.php for further information.

Utopia Limited is directed by Gary Slavin, whose recent Off Broadway credits include Show Choir! – The Musical and the hit political revue Bush Is Bad. Musical direction is by Zachary Schwartzman, an associate conductor with New York City Opera and Glimmerglass Opera.

Since 1924, the Blue Hill Troupe has produced a large-scale Gilbert & Sullivan operetta every spring, with lavish production values and full orchestra. Each year, the net proceeds benefit a different New York City charity, with the impressive total donated topping $3.5 million. Prior charities include The Carter Burden Center for the Aging (2011), The New York Foundling (2010), Inwood House (2009), and Covenant House New York (2008).

The all-volunteer Blue Hill Troupe has been featured on CBS Sunday Morning and with The New York Pops at Carnegie Hall. For fifteen years, they presented a concert in the Metropolitan Museum of Art’s Concerts and Lectures series, and they continue to concertize in venues around the city.

News Source: Blue Hill Troupe, Ltd. :: This press release was issued on behalf of the news source by Send2Press® Newswire, a service of Neotrope®. View all current news at: http://Send2PressNewswire.com .