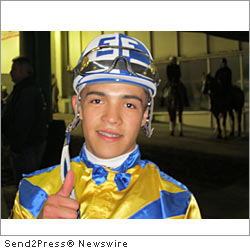 LOS ANGELES, Calif., Feb. 2, 2012 (SEND2PRESS NEWSWIRE) — Eswan Flores wanted to give back to the non-profit organization, FixNation, that worked to control the cat population at the Los Alamitos Race Course where he began his horse-racing career so he decided to sponsor them.

FixNation is a non-profit organization that offers free spaying and neutering of stray and feral cats in the greater Los Angeles area.

“They’ve been very helpful in controlling the cat population at the Los Alamitos Race Course and people will soon see their logo on my pants,” says Flores. “What a great way to combine my compassion for cats and horse racing.”

It was reported that several hundred homeless cats and kittens were living at the racetrack. To date, approximately 100 have been spayed and neutered.

Training was provided to teach Flores and his manager how to humanely and safely trap the cats. Their compassion was clearly embraced by other racetrack employees who also care for the cats.

“FixNation has made horse racing history while bringing smiles to our faces, specifically by having our logo worn by jockey Flores,” says Karn Myers, clinic director/founder/COO of FixNation, Inc. “I simply cannot thank Flores enough for being so supportive of our organization and raising public awareness.”

Elizabeth Cava, a trapping trainer at FixNation, adds that, “It was so reassuring to see that they sought out a humane solution – a life-based solution – rather than the only other alternative – trap and kill.”

About Eswan Flores:
Flores is an 18-year old high school senior and a native of Mexico. He started going to the track in Santa Anita when he was eight while his father worked as a groom. At 10, he would ride his bike to the Arcadia track, studying horses. Friends and family took him to ride at ranches. He is quickly making a name for himself in thoroughbred horse racing at one of the most premier tracks in the country. He has been interviewed by multiple entities including: the Los Angeles Times; PBS and Fox News.

About FixNation:
FixNation, Inc., a non-profit corporation, has a mission to reduce the population of homeless cats by sterilizing as many as possible. In addition, by consistently demonstrating the effectiveness of Trap-Neuter-Return (TNR), it seeks to bring about changes in public policy so that TNR becomes the officially sanctioned and government-funded approach to homeless cat management. It supports and promotes all humane initiatives and education to bring about the day of “No More Homeless Cats in L.A.”

News Source: Eswan Flores :: This press release was issued on behalf of the news source by Send2Press® Newswire, a service of Neotrope®. View all current news at: http://Send2PressNewswire.com .