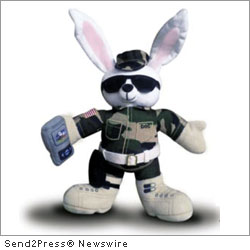 CARSON, Calif., Feb. 3, 2012 (SEND2PRESS NEWSWIRE) — DocMagic, Inc., the mortgage industry’s leading provider of automated loan document production and compliance solutions, announced that it has teamed with the 315th U.S. Army Tactical Company to distribute this year’s new DocMagic Bunny “Sergeant Doc” to local children and their families. The bunny is dressed in regulation military clothing as a tribute to the men and women who serve this country and the families that eagerly wait for their return.

Each year DocMagic delivers thousands of bunnies to its customers. The DocMagic Bunny is a staple of the company’s brand and every year the employees at DocMagic participate in a contest to pick the theme. For 2012, the employees overwhelmingly chose to show support for our country’s troops by outfitting Doc in regulation military fatigues proudly displaying the American flag and equipping him with a GPS device.

“Sergeant Doc was specifically created to honor the men and women who serve in the armed forces,” said Dominic Iannitti. “They and their families make enormous sacrifices and we wanted to show our appreciation. We are pleased that the 315th U.S. Army Tactical Company was able to help connect us with the families of those who serve. We are additionally gratified by the enthusiastic response from our customers, who have phoned and written to thank us for honoring our nation’s true heroes.”

With the help of the 315th, Sergeant Doc is being distributed to schools, youth organizations, churches and parks as well as the children and families of those deployed. These contributions are in keeping with the finest military traditions of the United States Army, which greatly appreciates the support of companies like DocMagic. The campaign began during the holiday season and is now continuing into the New Year.

About DocMagic:
Founded in 1988 and headquartered in Carson, Calif., DocMagic, Inc., is a mortgage technology company that develops software, processes and web-based systems for the production and delivery of compliant loan document packages. DocMagic provides compliance expertise regarding the completion of all applicable forms and both guarantees and warrants that all agency forms are up-to-date and in compliance with GSE requirements. DocMagic’s compliance experts and in-house legal staff constantly monitor legal and regulatory changes at both the federal and state levels to insure accuracy.

For more information on DocMagic, visit our website at http://www.docmagic.com .

News Source: DocMagic, Inc. :: This press release was issued on behalf of the news source by Send2Press® Newswire, a service of Neotrope®. View all current news at: http://Send2PressNewswire.com .