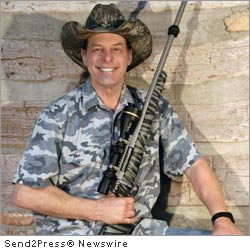 Ted will appear first from 11 a.m. to Noon at the Outdoor Channel Booth #8320 in the Outfitters and Guides Hall (Main Hall) and then again from 1 – 3 p.m. in the Second Floor Cameron Street Lobby of the State Farm Show Complex.

An advocate of hunting and gun-ownership rights, Nugent currently serves on the Board of Directors of the National Rifle Association (NRA). He has hosted the Ted Nugent Kamp for Kids, which combines a curriculum of hands-on hunting, conservation, archery and a strong anti-drug message aimed mainly at underprivileged inner-city children. Nugent also is a spokesman for the National Field Archery Association, Mothers Against Drunk Driving, and Big Brothers Big Sisters of America. He is a national spokesman for the Drug Abuse Resistance Education (DARE) program, advocating the “natural highs” to be found in an outdoor lifestyle.

“The future of the shooting sports in this country is in the hands of tomorrow’s outdoorsmen and women. The youth of America must be educated to the wholesome and valued world of hunting and conservation. Because rock ‘n roll plays such a pivotal role in a young person’s life, I will share my wonderful experiences with them,” said Nugent.

For more information on the Show, List of Exhibitors, or a complete schedule of seminar speakers, contests and family entertainment offered at the 2012 Eastern Sports & Outdoors Show, visit www.easternsportshow.com .

News Source: Eastern Sports and Outdoor Show :: This press release was issued on behalf of the news source by Send2Press® Newswire, a service of Neotrope®. View all current news at: http://Send2PressNewswire.com .