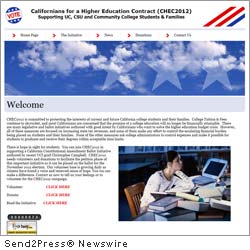 LOS ANGELES, Calif., Feb. 16, 2012 (SEND2PRESS NEWSWIRE) — For over six months, Christopher Campbell, a recent graduate of the University of California, Irvine, has been spearheading a campaign, CHEC2012 (www.chec2012.com), that will profoundly change affordability and access to public higher education for currently enrolled and future college students in California.

Campbell’s proposed amendment to the California State Constitution stipulates that “any student in good standing at a California Public Postsecondary Institution will not see an increase in their fees or tuition while enrolled in a degree program.”

The non-partisan, grassroots amendment would make permanent the assurances for affordability that Campbell feels are critical to students and families budgeting for college, and will help keep California’s system of higher education competitive.

Campbell states: “You would never take a luxury cruise if you knew you would be forced to pay substantially more money at sea before being allowed to go ashore. Students need a ‘contract’ with a reliably predictable tuition and fee structure, as well as a commitment from the institution to make it possible for them to get their degree within a specified period of time.”

Campbell was inspired to author the measure after completing his bachelor’s degree. He witnessed the hardships that escalating costs were having on him and his fellow students as well as their families. Campbell sees his work on this initiative as an important part of making the budgeting process for UC Regents, CSU Trustees, and Community College Districts more transparent and accountable to Californians.

Title & Summary is expected to be issued by the State Attorney General within six weeks, after which the campaign, Californians for a Higher Education Contract (CHEC2012) can begin collecting petition signatures needed to qualify the initiative for the November ballot.

After reviewing recently proposed legislation targeting tuition and fee breaks for middle-class students, Campbell offered, “Students need more than a program here or there. We need a comprehensive set of reforms and a serious commitment to affordability and accessibility for all California residents. The skyrocketing cost of higher education divides people on the fundamental level of income, and burdens succeeding generations with unmanageable debt.”

Campbell hopes that his work will benefit students now and into the future. “I am advocating for students who will go through what I just went through in financing my education. Too many of California’s future leaders are being forced to drop out of school, or abandon plans for enrolling in college. Although there are a host of initiatives and legislation designed to narrow the education budget gap, it is past time we had a Prop-13 style measure to impose controls on the portion of those budgets borne by students and their families.”

The full text of the initiative can be viewed on the initiative’s campaign website at http://www.chec2012.com, or on the California Attorney General’s website at http://ag.ca.gov/initiatives/activeindex.php . Interested parties are invited to comment, volunteer or donate at the campaign website, or to participate on the campaign’s open forum Facebook group: Californians for a Higher Education Contract (CHEC2012).

News Source: CHEC2012 :: This press release was issued on behalf of the news source by Send2Press® Newswire, a service of Neotrope®. View all current news at: http://Send2PressNewswire.com .