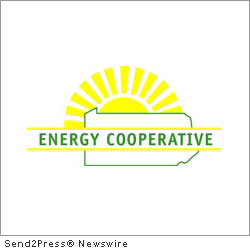 PHILADELPHIA, Pa., Feb. 16, 2012 (SEND2PRESS NEWSWIRE) — The Energy Cooperative, an electric generation supplier (EGS) since 1998, has announced that it is increasing the amount of Pennsylvania wind power in their 2012 electricity mix. The new renewable energy mix contains 99 percent PA wind power, of which 25 percent wind is sourced from the newly developed Highland Wind farm in Cambria County, PA.

The Energy Co-op also sources 1 percent of its renewable energy from PA solar power, the majority of which is located on the rooftops of the cooperative’s own members in southeastern PA.

“We continually strive to offer our members the highest quality product on the market,” said Jossi Fritz-Mauer, Co-Director at The Energy Co-op. “I’m proud to offer our members electricity from the best technology that exists within our geographic footprint, so that ultimately we provide the strongest support for the further development of renewable energy.”

As part of its ongoing commitment to supporting Pennsylvania renewable energy, The Energy Co-op helped launch the Choose PA Wind (www.choosepawind.com) initiative. Choose PA Wind was created to encourage energy consumers in the state to power their businesses and homes with energy from PA wind farms.

The Energy Co-op is a long-time supporter of local, renewable energy, and has been providing a 100 percent renewable electricity product since 2006. In 2010, the organization made the commitment to exclusively purchase power generated in PA and decided to further this effort by participating in the Choose PA Wind initiative.

News Source: The Energy Cooperative :: This press release was issued on behalf of the news source by Send2Press® Newswire, a service of Neotrope®. View all current news at: http://Send2PressNewswire.com .