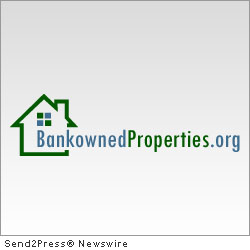 NEW YORK, N.Y., Feb. 20, 2012 (SEND2PRESS NEWSWIRE) — According to Bank Owned Properties (Bankownedproperties.org), some 600,000 properties in the U.S. are reported to begin the foreclosure process as the foreclosure industry begins to function more normally.

Many of the properties that began the foreclosure process in the third and fourth quarters of 2011 will become bank-owned properties in 2012, and many will also end up as short sales. Lenders continue processing more of the 2011 delayed delinquencies, plus new foreclosures caused by high and extended unemployment. Homeowners with severely underwater mortgages push smaller but continuous surges of foreclosures also depressing home prices.

The recent number of bank foreclosures filings decreased 28 percent, and home prices increased 12 percent over 2011. Many people are without good-paying jobs and have settled into lower-paying positions, thereby exasperating the situation.

Unemployment numbers recently reflected a hiring of some 264,000 new employees, but there are hundreds of thousands of others who have stopped looking for work, a classification different from the unemployed, known as jobless.

The Obama administration said it was expanding eligibility for its Home Affordable Modification Program, known as HAMP, to borrowers with higher debt loads and tripling the incentives it pays to banks that reduce principal on loans using some of the $29 billion set aside for the program. The opponents say that this intervention further prolongs the depressed housing market, and suggest that the market could correct itself more effectively by allowing bankruptcies and foreclosures to bottom-out, permitting the market to then begin rebuilding with a clean slate.

President Obama wants Congress to approve a $5 billion to $10 billion program to help U.S. homeowners refinance their homes as part of a vast package of proposals to support the depressed housing market, including a tax on banks to pay for the plan.

Data from Bankownedproperties.org shows that Arizona, California, Florida, Texas, and Georgia foreclosures actually decreased by thousands of properties, while Colorado increased by over 5,000 properties, and were higher priced, as were homes in Texas. All of these states have been among the most affected by the economic meltdown in the last four years, as families cope with lost jobs and reduced incomes.

News Source: Bankownedproperties.org :: This press release was issued on behalf of the news source by Send2Press® Newswire, a service of Neotrope®. View all current news at: http://Send2PressNewswire.com .